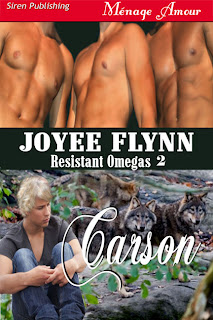 My guest today is author Joyee Flynn, author of the Resistant Omegas series. Omegas and Alphas are both favorites with me. Let's get started! (Thank you Dawn Roberto for helping put this together)

Joyee, why don't you start with telling us a little about yourself?
I'm a born and raised Chicago girl. I graduated from University of Illinois Urbana/Champaign with Finance and Political Science degrees. I'm currently in the process of finding a place in CO and working to move there. I traveled there recently and really liked the area. I'm actually kinda boring, lol. I work 80-90 hr work weeks, I'm pretty much attached to my laptop. My pup Marius and I live alone, no kids, not currently dating. We like calm and quiet. I rarely get it, but it's a goal in life!

You write solo and with Stormy Glenn. How did you meet Stormy and decide to write together?

I emailed her with an outline of idea for the Delta Wolf series, some of my own works in progress, and pretty much just begged she give me a chance. Luckily she liked the idea.

That's hard to answer… it's kinda like picking a favorite family member. All of my main characters, have at least a little bit of me in their personalities in some form or another. Riley from the Marius Brothers is one that's a LOT like me I think because if I could do college over again in an alternative universe I would have gone to medical school so he's my vicarious living. Reed in Lust and Vamp was challenging because it was a way for me to work some things. The way he dances, what it means to him is how writing is for me. So it was very challenging to get it just right for my perfectionist personality.

Tell us a bit about your latest book, and what inspired you to write such a story.

Isaac Dragos: Beyond the Marius Brothers #1 was actually a demand from Stormy Glenn's and my own Yahoo Group. Isaac plays a vital role in Remus: Marius Brothers #2 and after #3 came out, they started talking because I said I was going to work on Victor #4 that was released last month and holy crap did everyone just jump in and beg for his story. Which was a trip for me because I'd never thought to give him one. I promised I'd think about it… and when I did I sat down and just cranked out 17k words the first day I worked on it. It was CRAZY and just took a life of its own. It's chronologically after Victor #4, but since he's not a Marius Brother I gave him a spin off series name in case I come along other characters in that world that need a story as well.

How would you describe your creative process while writing this book? Was it stream-of-consciousness writing, or did you first write an outline?

Both. I have my books in a loose outline, most times I stick to it, adding some developments that pop up as the story progresses.

Did your book require a lot of research?

There was a lot of back story to retell, not so much research beyond re-reading and getting back into the books I wrote months and months ago. And while that might sound like an easy write, it's not. There's already established timelines, and plot advances that I ended up spending so much time trying to fit Isaac's story and side of things into the timeline. There was a lot of notes, a lot, lol.

Have you ever experience weird cravings while you write? If so, what kind?

Besides chocolate… Alana, the brat, got me addicted to Cheryl's frosted sugar cookies.

Do you have another book in the works? Would you like to tell readers about your current or future projects?

I have a HUGE project coming up that's super secret but there will be an announcement/unveiling of it around September. I'm really excited about it because I know it's like nothing anyone's done before, at least that I've ever seen or heard of. And one was just announced as a joint project with Stormy and Gabrielle Evans. We're doing something very different and unique. We've been having a blast working on it and we think everyone's really going to love it. http://www.midnightmatings.com

Do you work on one project at a time? Or do you multi-task?

I normally work on one writing project in a day. But I'm always involved with other projects at the same time. Right now I'm holding a fundraiser in my Yahoo Group for the Braille Institute that helps blind kids learn to read and gets them access to books. I'm also working on a bar crawl for the Gay Romance Lit Retreat in New Orleans in October.
Which authors works do you enjoy reading and do you have any other authors that you bounce ideas of?
I'm a very eclectic reader, I read a little of everything. I bounce ideas off Stormy Glenn and Gabrielle Evans when I need to work through the plot monkeys. Working with them have made us become very close and they are great friends

What is the strangest source of writing inspiration you’ve ever had?

My dreams or nightmares, believe it or not. A lot of times I have some crazy dream that develops into something I can use in a story and I just run with it after I mull it over.
If someone hasn't read any of your work, what book would you recommend that they start with and why?
I would say Micah: Marius Brothers #1. It's one of my first books that had two spin off series come of it and over all I've gotten the most positive feedback on.

Which of your characters would you most likely fall for if they were real?

That's hard to answer… it's kinda like picking a favorite family member. All of my main characters, I have at least a little bit of a crush on since they are my type of man in one way or another.


When Carson's old inner circle is challenged and overthrown he knows that he will become the Omega for the new Alpha and his Betas. After all he barely survived the abuse dished out by his last circle and he knows that, as defective as he is, he can only hope to keep the punishments at bay for so long.


Declan, Ian, and Taylor have never wanted to run a pack, but after seeing Carson and realizing how he was being treated at the hands of certain members of the pack, they couldn't stand by and let him suffer. But while they may have won their dreamed of Omega they quickly find it becoming a nightmare.


Can they help their Omega realize his worth or will he forever be an Omega without hope?

Available now at Siren Publishing!
http://www.bookstrand.com/carson
Posted by Kayelle Allen at 12:01 AM