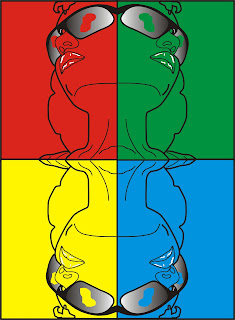 The late author Barbara Karmazin (affectionately known to her critique buddies as "Chainsaw") used to harp on "roaming body parts." What she meant was the tendency of authors to write such lines as:

His hand caressed her shoulder.
He dropped his eyes.
Her back pressed against the wall.
His mouth spoke her name like a prayer.

In the first instance, what else would he caress her shoulder with? His feet maybe? If the character doesn't have hands, or he's an alien and could be using tentacles... I suppose so. But for the most part, the hand is obvious. He caressed her shoulder is better.

He dropped his eyes and they went boing! boing! He can drop his gaze, but not his eyes. While we're on the topic of eyes... He also can't meet her eyes. (Where? In the park?)

Which brings us to his mouth spoke her name... Unless he could also speak her name telepathically (I write SciFi; I know it can happen) then he spoke her name works.

I ran into this one recently and think it bears mentioning. "His mind remembered the incident." As opposed to his big toe remembering? Of course his mind remembered, again -- unless he's an alien who also thinks with his third left tentacle. If he does that, by all means tell us. Otherwise, it's safe to assume we know what body part is involved.

For more good ideas on how to handle this and other writing hazards, check out the Warrior Writers blog by Kristen Lamb. Her article on Dec 26th, 5 Common Writing Hazards is excellent.

What are some of the roaming body parts you've ... uh... encountered in your reading?
Posted by Kayelle Allen at 10:57 AM