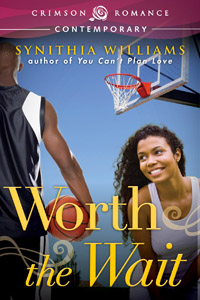 Synithia Williams, welcome to Romance Lives Forever. Let's talk about your book, Worth the Wait.

Genre: Contemporary Romance
Publisher: Crimson Romance
Length (words): 78,000
Heat rating (based movie ratings): R
Tagline: When a virgin frustrated by her nonexistent dating life asks a playboy for a one-night stand, can they really ignore their attraction after the affair?

After Tasha Smith is dumped yet again because of her virginity, decides it’s time to stop saving herself for marriage and start dating like women in the twenty-first century. She sets out to find a man rumored to be good enough in bed to relieve her of the nuisance, but discreet enough to keep her request a secret. Jared Patterson seems like the perfect candidate. Yet after one searing kiss, she wonders if she’ll escape the night unscathed.
Jared’s job as a successful fitness instructor and entrepreneur has helped him keep a string of meaningless relationships from the east to the west coast. After learning the hard way that women can’t be trusted, he has no qualms going from one sex only relationship to the next. Although Tasha is one of the few types of women he avoids--a good girl--the man in him can’t turn down her tempting offer.
What starts out as a onetime thing quickly turns into an affair neither want to stop. But when an unexpected situation drastically alters their relationship, it leaves them both asking if it was Worth the Wait.
Buy links:
Crimson Romance: http://crimsonromance.com/upcoming-releases-romance-ebook/worth-the-wait/
Amazon: http://amzn.com/B00AKERZ9K/

What are your main characters' names, ages, and occupations?
Tasha Smith 29 Tasha is the Deputy Director at the Central Midlands Recreation Commission.
Jared Patterson 33 Jared is a personal trainer who started his career helping Hollywood stars get in shape. He now owns a production facility where his line of health food products is manufactured and several gym franchises.

Tell us about the main character in your current book. What is she like?
Tasha is a strong woman, but slightly naïve. She enjoys reading, watching basketball and working in her garden. Her family is very important to her. Every Sunday is spent having dinner with her family. She likes her job, but really wants to get married and have a family one day.
If your main character was here today, what would she say is her strongest point?
Her ability to reign in emotions and handle tough situations with a level head is her strongest point.
Does she think she has a weakness? (If so, what does she think it is? What does her lover think it is? What does her enemy think it is?)
She didn’t, until she asked Jared to take her virginity. Then she quickly it was difficult for her to deny him. Jared realizes that she’s attached to him, but does nothing to change that because he get’s attached to her as well.
What drives your heroine to do the things she does? What makes her want to be the "good girl?"
Her father is a strict Baptist minister that instilled the importance of abstinence until marriage. This was okay for her in high school and college where she saw lots of her friends end up with broken hearts because a guy dumped them after having sex. But later it wasn’t such a novelty. Men weren’t interested in dating a woman when sex automatically meant marriage. She’s tired of her virginity hindering her love life and that’s why she asks Jared to relieve her of it.
What's your main character's favorite guilty pleasure?
Before Jared, it was laying around watching Sports Center. After Jared, it was sneaking off to be with him.
If you didn't know how old you were how old would you be?
Despite achieving so much in my career, the being unable to lose my virginity by 29 makes me feel as if I’m still in my teens.
A biography has been written about you. What do you think the title would be in six words or less?
Getting more than you bargained for
If you came with a warning label, what would it say?
Caution: This woman may be virgin, but she will bring a certain playboy to his knees.

Please Fill in the Blanks (as Tasha)

I love pizza with pepperoni and sausage.
I'm always ready for watching a good game of.
When I'm alone, I work in my garden.
You'd never be able to tell, but pretending to be my daddy’s good girl is annoying the crap out of me.
If I had a halo it would be on fire because of the thoughts of Jared running through my head.
If I could afford to go to the NBA all-star weekend I'd attend all the parties and meet my favorite NBA stars.
I can never regret asking Jared to take my virginity because in the end it was a blessing.

Synithia Williams has loved romance novels since reading her first one at the age of 13. It was only natural that she would begin penning her own romances soon after. It wasn’t until 2010 that she began to actively pursue her dream of becoming a published author. Her first novel, You Can’t Plan Love, was published by Crimson Romance in August 2012. When she isn’t writing, this Green Queen, as dubbed by the State Newspaper, works to improve air and water quality, while balancing the needs of her husband and two sons. You can learn more about Synithia, and her novel, by visiting her website, synithiawilliams.com, where she blogs about writing, life and relationships.

A Heart to Heal
Contests