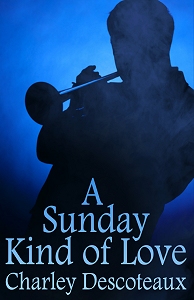 Charley Descoteaux, welcome to Romance Lives Forever. Let's talk about your book, A Sunday Kind of Love.
Genre: M/M Contemporary Erotic Romance
Publisher: Amber Allure (Amber Quill Press)
Cover artist: Trace Edward Zaber
Length: Extended Amber Kiss (13K words)
Heat rating: 3
Blurb:
Jazz trumpeter Jake McKynnie is living a lonely existence in LA, convinced that's the best he can expect from life. He indulges in a bender to drown thoughts of missing his estranged son's high school graduation, but to his shock, finds the boy on his doorstep the next morning. DJ grew up in a small town with his mom and stepdad, but now he's come to LA with big dreams of becoming an actor. He's also not above doing a little matchmaking for his lonely father while he's at it.
Jake takes DJ to a friend's salon, where he gets a hairstyle fit for professional headshots. As they leave the salon, however, the observant DJ sends Jake back inside alone to see Mason, the sexy stylist who was checking him out, which leads to a thrilling and memorable encounter.
After their impromptu tryst, Jake can't get Mason's strong hands and hot body out of his mind. And for the first time in years, thanks to his son and Mason, he can actually imagine an exciting future when it comes to his personal life. Yet Mason's hiding something about himself, and his secret could force him to blow town at any time. Will he stick around long enough to replace the ghost of Jake's past?
Buy links:
Amber Quill Press http://www.amberquill.com/AmberAllure/SundayKindLove.html OR http://tinyurl.com/mpsxjzx
What are your main characters' names, ages, and occupations?
Jake McKynnie is pushing fifty, he works as a session musician by day and plays double bass and trumpet in jazz clubs by night.
Mason Hall, also pushing fifty, is currently working as a colorist in a full-service salon.

What inspired you to write this book?
This story began with a photograph and a comment by a reader on Goodreads, and took shape as a series of "What ifs".
I don't own the picture so I can't post it here, but you can see it on my Pinterest board for this book. Once I saw that picture I knew I had to write Jake's story (I'd known him for quite a while by then).
The 1st "What if": What if DJ, the boy who calls Jake "Dad", showed up at his door the morning after graduation?
#2: What if Jake took DJ to his friend's salon to get an "LA appropriate" hair cut?
#3: What if one of the stylists (the hot one who ties Jake's tongue in knots, of course) was the reason Jake hadn't been to the salon for a while?
Jake, DJ, and Mason took off with the story from there and I had to dance fast to keep up. They had control as soon as Jake and DJ entered the salon, but it took me a little longer to figure that out.


A couple of readers of my debut, Comfort and Joy, said they wanted more information about some of the supporting cast. I've felt that way after reading a story too, so I gave it serious thought and decided to fill in some of the gaps sooner rather than later. A Sunday Kind of Love does that in a roundabout way.
Which character in your current book do you think readers will like the most? Why?
I hope they like Jake. He's a little dumbfounded by DJ's arrival but does his best to rise to the occasion. Life has knocked him around a bit but he's a scrapper and even though he thinks he's given up (on a lot of things), I doubt he ever could.
When you write, what things do you want close at hand? (Coffee, water, chocolate... pictures of gorgeous hunks for inspiration...?)
I usually have a large mug of Diet Mt. Dew, too many tabs open on my browser (for "research"), and a bunch of toys cluttering my desk. Right now I have a full cast of Star Trek (TOS) Mini-Mates, and a headless Barbie-sized doll with magnets in her feet—she poses like a dream but her head keeps falling off!
Are you a plotter, or do you prefer to make it up on the spur of the moment?
I'd love to be a plotter! I'm sure there would be a lot less editing in my future if I could do that. But I just try to listen to the characters and they usually tell me what to do.
Any advice for new authors?
Write the stories you want to read and work on developing your own unique voice. Voice is the best tool a writer has, so guard yours like your favorite grandchild.
What aspect of your life do you write into your books?
The world-view I inherited from being born into a low socio-economic class. When I was a kid my family was on public assistance for many years, and I lived with a single mom in the early 1980s. I've been on my own since I was seventeen and spent some time homeless, so you'll probably never see anything too upscale in my fiction!
What other jobs have you held besides writing?
I've done a lot of different jobs over the years—sometimes two or three at a time. I've been a florist assistant and a waitress, worked in a book store and a deli, a three-person newspaper and more than one library, and spent time on both sides of a bar (cocktail waitress!). I also tried to pass as a corporate drone for a while and didn't do half bad considering I wrote sometimes when I should've been working!
What are you currently reading for fun? Anything for research?
I like a little of everything when I'm reading for fun: Stephen King to Barbara Kingsolver, Michael Cunningham to Holly Black. Lately I've been preoccupied devouring Jordan Castillo Price's backlist . Her PsyCop series is amazing, but I caught up too fast and now have to wait for the next one to come out!
Some of my latest research topics have been photographing hummingbirds, trails and hikers' camps on the coast, qualifications of a home health aide in , and tattoos. Oh, and the great Lee Lofland book Police Procedure & Investigation: A Guide for Writers (Howdunit) has been on the table beside my easy chair for the past six or seven months.
If you could time travel what era would be your first stop?
I'd stop in the mid- to late-60s and spend as much time as I could just going to concerts: Led Zeppelin, The Doors, Janis, Jimi, the original lineup of The Grateful Dead—if I could, I'd keep doing that until 1991 so I could see Alice In Chains' Facelift concert in Seattle that was almost snowed out!
What kind of music do you listen to while driving? Same question when writing?
In the car it's usually jazz—it keeps my road rage in check. When I write, though, I need silence (or as close as I can get, living on a busy street!). Sometimes I'll prime the pump by listening to the soundtrack for a story before I start writing, though.
Do you play any musical instruments?
No, but I wish I did! I've spent a lot of time with musicians, and even did some singing in a bar band, but the only thing I really have the discipline to stick with is writing.
What's your favorite movie?
The Wizard of Oz. It's delightfully subversive but wrapped in a shiny package of fairy-tale normalcy. Plus, the flying monkeys are cool.
Are you the eldest, middle, baby, or only child?
I'm the elder of two girls, which is probably why I'm so bossy.

I love pizza with salami and olives.
I'm always ready for a Romance!
When I'm alone, I write.
You'd never be able to tell, but I spent my 40th birthday in the pit at OzzFest.
If I had a halo it would be black leather with fringe.
If I could rule the world I'd make sure everyone could make a decent living doing something that gives them joy.
I can never stop writing because my characters would never let me sleep at all!