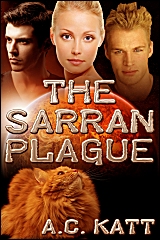 http://www.jms-books.com/index.php?main_page=product_info&products_id=889
Blurb:
On far away Sarran, the Warriorpair Jonal and Tonas, along with the rest of the planet's males, lost their Fem when the Zyptz unleased a toxin that killed only females. Sarrans mates in Triad, two males with one female, and without fems, their civilization stared extinction in the face.
But the Sarrans are tough and smart. They searched the galaxy for a genetically compatible species and found Earth. They were told the Earthen fems were an inferior species, with many unable to establish the psychic link essential to the triad bond, but they had to try.
En route, from as far out as the asteroid belt, they heard fem voices calling to the mates. Success! But their joy is short-lived, because the human fems are in pain -- they are dying. The Zyptz found Earth before the Sarrans and unleashed their toxin.
Admirals Jonal and Tonas are determined to obtain a fem at almost any cost, and rush to save Anya, because they've already mated with her in their minds.
***
Kiss Me, Straight by Michael P. Thomas
Gay/Bisexual Erotic Romance
http://www.jms-books.com/index.php?main_page=product_info&products_id=633
Blurb:
Beijing, Tokyo, Sydney -- these exciting cities are standard fare in the life of flight
attendant Todd Eisenbraun, and he chases a romance with sexy-but-straight Josh through them all.

Closer to home, a new neighbor in his apartment building has a huge crush on Todd. His friends -- Katie, a flight attendant-turned-small appliance repairwoman, and Marzipan Q. Thespian, a man-dangling local philanthropist -- think Todd should at least give Chris a shot. Sure, he's overweight, but he's also handsome, a hilarious playwright, and a great cook ... what's not to love?
Todd and Chris become quick friends, but Todd's idea of the perfect man is skinny and straight, and Chris is decidedly neither. Josh may have a fiancée and a teenaged son, but Todd just knows he's "the One."
But if Josh is straight, the road to love is not; Todd is jostled by internalized homophobia, body image issues, exotic locales, the glamorous world of sewing machine repair, and a community theater musical salute to the life of Judy Garland before he arrives at the realization that he's been looking way too hard for something he may have already found.
***
Portal to by Tinnean
Lesbian/Bisexual Sci-Fi Erotic Romance
http://www.jms-books.com/index.php?main_page=product_info&products_id=621
Blurb:
Terra is overcrowded, but a solution may have been found -- tucked away in is alien technology that leads to the creation of a method of space travel known as portaling.
A party of soldiers and scientists led by Dr. Emma Bradley, Colonel John Berger, and Dr. Layton Tremayne are about to take what they believe is the first step into the unknown. But what they discover is not only a wonder but a puzzle. The city of on the distant planet Nibiru has obvious Terran influences. Who was there before them?
When Emma, John, and return to Terra, they're dismayed to find things are even worse than they were when the trio left. The atmosphere is on the verge of toxicity and the population is reaching Malthusian proportions. Worse, there are plans afoot to portal the excess population off Terra to planets which may not be what their new inhabitants expect. Most won't survive.
Then they learn that a platoon of soldiers were portaled to for a planned invasion of Nibiru and the surrounding planets. Emma, John, and scramble to stop the military action, but will they be able to take back the city that's become their home?
***
Sexual Deception by Eva Hore
Bisexual BDSM Erotic Romance
http://www.jms-books.com/index.php?main_page=product_info&products_id=663
Blurb:
Sarah's brother, Steven, has been bullied at work. To help him overcome his difficulties,
Sarah accompanies him to see a psychiatrist named Michael Martin. She's blown over by Michael's good looks, his charisma, and his obvious interest in her.

When Michael asks her out, Sarah is swept up in a whirlwind romance, but she gets much more than she bargained for. Michael takes her on a roller coaster ride of emotions, from first date to marriage, and introduces her to some illegal sexual activities within his practice.
Disgusted, she befriends a patient named and, with the help of 's brother, Jackson, they swear to bring down Michael and his perverted ways. Sarah learns the hard way that the man she married isn't who she thought he was. Can she escape Michael's manipulative and devious ways? Or will she become just another victim of his sexual deception?