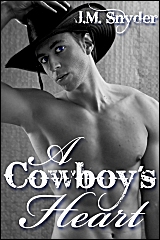 A Cowboy's Heart by J.M. Snyder

Gay/Transgender Historical Erotic Romance
http://www.jms-books.com/index.php?main_page=product_info&products_id=474
Blurb:
Ranch hand Tommy Prout thinks he's in love ... with his boss, Hal Bolstrum. Problem is, Hal's engaged to be married to the ranch owner's daughter and, though he knows of Tommy's crush, he sees it as nothing more than harmless affection. When payday rolls around and the other cowboys want to ride into town to check out the girls at the Wildhorse saloon, Tommy tags along to throw off any suspicion anyone might have about his feelings for his boss. He sure as hell doesn't want to spend his money on any of the soiled doves the town has to offer.
At the bar he meets Lila, an enterprising young working girl who takes a liking to him. When Tommy says he wants to be left alone, Lila suggests he rest in her room -- with the promise they don't have to actually do anything. But Lila isn't like the others, and when she discovers Tommy is more scared of her than attracted to her feminine charms, she lets him in on a little secret.
Lila's real name is Stephen Marsh. He lives as a woman, moving from saloon to saloon, pleasing men for money. He loves men and enjoys his work, and what others don't know about what's under his skirt doesn't bother him. In all his years on the prairie, he's never met someone quite like Tommy. When he discovers Tommy is sweet on Hal, he suggests teaching the cowboy just how to please a man.
He doesn't mean to lose his heart to Tommy in the process.
With "Lila" in his life, Tommy begins to dream of someone softer than Hal, someone pretty when dolled up but still man enough where it counts. Someone like Lila. As his feelings deepen, can he use Lila's own teachings to win the heart he really loves?
***

The Argento by Joshua Skye 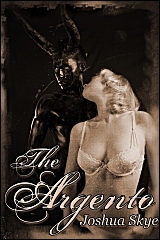 Blurb:
Beautiful transgendered Camilla Nicolodi has a lifelong obsession with eccentric Italian architect Giuseppe Soavi. Since childhood, she fantasized about the man and his work, dreaming she would meet, fall in love, and marry him one day. But the naïveté of youth fades into an adult desire to own a piece of his legacy. As his work was few and far between, most of it long left to ruin, she finds her wish in an old, rundown slum in .
Considered Soavi's masterpiece, the Argento is a twenty-story residential building hidden in bustling, modern-day . Neglected for decades, it's now home to a festering community of indigents betrayed by contemporary culture to seek pleasures in otherworldly activities. They've turned rooms into gruesome shrines to a dark and monstrous entity.
Camilla vows to return the Argento to its original splendor. Spurred by her passion for Soavi and a budding camaraderie with her lawyer, Camilla undertakes the intimidating mission of bringing the Argento back to life.
But dark things fester in the shadowy halls and gloomy rooms, an ancient evil has taken up residence in the building, and it has no intention of being driven out. Cruel, devious, and perverse, the demon seduces trespassers, becoming all they desire and all they fear. The beast's evil malevolence knows no limit, and it will stop at nothing to take back what it calls its own.
***

we in my Trans by j/j hastain 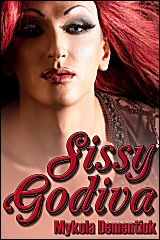 It's love at first sight when Vinnie sees Sissy Godiva -- who used to be his high school classmate, Joey. She's feminine and beautiful in her fluttery halter tops, tight leggings, and beehive hairdo. Vinnie sees her everywhere he goes in the that free-love '60s summer. He's half in love with her, though he isn't queer, "no stinking way."
He tells his neighbor, Mr. Phillips, about her during one of their afternoon jerk-off sessions. When it turns out Mr. Phillips knows Sissy, Vinnie invites her over so they can all jerk-off together -- just three guys doing what they have to do, right? No touching. No emotions. Nothing "faggoty."
But Vinnie finds himself being pulled closer and closer to Sissy, hanging with her and her trannie friends, visiting the Giddy Up! gay bar with her, having sex and waking up naked beside her in the . Sissy's mercurial temper doesn't make her easy to get along with, and Vinnie isn't a queer.
Are Vinnie and Sissy meant for each other? How can Vinnie keep her when everybody in the wants her? Is he just infatuated -- or is he really queer?
***

Just As You Are by Sam Singer