A few years ago I released a book called Royal Consort. It was a fun title, and combined my love of fantasy with my love of romance with an erotic touch. Somehow, I never found the right publisher for the book, and it just sort of died. Back in January, I requested return of the book, and it has since undergone a major revision to become book one in a trilogy. The Triad of PowerFirst Quest was released December 22, 2013. I'm really enjoying this story now that's it's been revised and edited, and leading to two more adventures. I hope you enjoy a peek at it, too!

During the time before the Great Forbidding was created, it was believed the defiance of the Renegades could be contained. To that end, the Council of Power called upon their Ancient Gods for assistance. In response, the Gods ordered creation of the Triad of Power–three swords, each one imbued with the essence of a gift unique to those who would wield the weapons as the Guardians of Foress. Like all magic, each crafted blade contained the driving sorcery of its creator–not all wizards are immune to the weaknesses of men, and within the Triad, conflict itself was bred without conscious intent or knowledge. So begins the legend, and the epic fantasy of the Triad of Power. 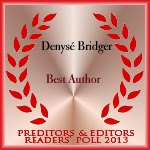 
Goodreads http://www.goodreads.com/author/show/4930595.Denyse_Bridger
Posted by Kayelle Allen at 12:00 AM