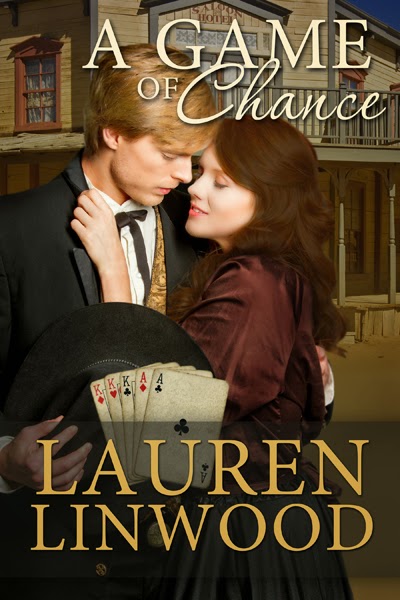 Title: A Game of Chance
Genre: western historical romance
Author Name: Lauren Linwood
Book heat level (based on movie ratings G, PG, PG13, R): PG13
Gambler Jed Stone journeys to California to track down Simon Morgan, the man responsible for his best friend's death. Arrested for robbery and murder upon arrival, Jed is shocked to see his face on a wanted poster. He escapes before his hanging, unaware that the man guilty of those crimes is the twin brother he never knew existed. In a case of mistaken identity, Jed acquires the most famous whorehouse in in a rigged card game his twin is meant to win.
Lily Frontiere takes over running Lucky Lil's from her dying mother, the house madam who shielded her by sending her away to boarding school. Lily's intelligence and astonishing resemblance to her mother help in her charade, but she's entered a world she knows little about. She clashes with the handsome stranger who turns up with the deed to Lucky Lil's in hand, yet she is attracted to the charming risk taker.
But Simon Morgan seeks both Lily's hand and ownership of Lucky Lil's—and he will go to any means to possess both. Will Jed foil his nemesis while bringing his outlaw brother to justice and win Lily's love?

Name: Jed Stone
Age: 25
Gender: male
Birthplace:
Profession: gambler
Ethnicity/Species (if not human): white
Describe his/her body build, skin tone, height and weight. Include any unique features such as dimples, freckles, or scars:
Jed is 6'2" and 180 pounds, with a muscled chest and thick, dark-blonde hair and a mustache. He has crystal blue eyes and a killer smile that melts hearts on both sides of the . Think Robert Redford as the Sundance Kid. Jed could be his younger brother!
Who is the significant other in your character's life (hero/heroine)?
Lily Frontiere, who is the daughter of the most famous whorehouse in . She was shielded from the house life and sent back east to a fancy boarding school and has returned to her home to find her mother dying and in debt. Lily wanted to be an actress, which her mother refused to allow her to do so, so she is using her acting skills and incredible similarity to her mother to "play" Madam Lil. With a dark wig and heavy make-up and her curves poured into one of Lil's dresses, she is Madam Lil—but incredibly naïve and having to learn quickly on the job how to manage her girls and the clientele they service.
How educated is this character? Is he/she book smart, self-taught, widely-experienced?
Jed went to public schools, where during recess he played poker with his teacher during recess and honed his math and gambling skills. He dropped out as a teen because the midwife who raised him grew ill, and he needed to support them. He worked at everything from a boot factory to a brewery, even keeping the books at a pub while pouring drinks. He fought for the in the Civil War and after the war ended, he put his street smarts and luck together and became a gambler, mostly playing poker.
What is your character's family like?
Jed is an orphan, raised by , the gruff midwife who delivered him. He doesn't know many details about his background, but will find out the truth when he arrives in . His father Gordon was an actor who pretended to marry a young Boston Brahmin teenager. She gave birth to a son, and Gordon took off with the child. He wanted the baby to show his millionaire grandfather that he'd become respectable, hoping Max would put him in the will. Little did he know his dying "wife" gave birth to a second son minutes later—an identical twin to the first son. Jed possess a locket with his mother's initials, which will play a key role in unraveling the tangled web of his past.
What inner doubt causes your character the most difficulty?
Jed learns that his twin brother is wanted for robbery, rape, and murder. He also discovers his father was a pretty shady character with a checkered past. His fear is he's got their "bad blood," and he'll never be able to rise above it. He's fallen in love, and he wants to be the best possible man he can be for the woman he loves, but finding out about these two relatives creates doubt in his mind.
What is your character's biggest need at the beginning of the story? As the story opens,
Jed's biggest need is to get out of jail! He's been arrested based on a wanted poster and sentenced to be executed, but it's actually his twin who's committed the crimes. Jed has no idea why his picture is on the poster, but he's not about to hang for another man's crimes, so he needs to escape—and fast!
How emotionally expressive is your character to others?
Jed is very self-contained, a reflection of his gambling skills and instinct. He studies people and picks up on the little things about them. He's used many aliases in the past and holds his cards, literally and figuratively, close to the chest. As he begins to fall in love with Lily, though, he opens up to the possibilities of a life beyond gambling, and we see a very playful side to him.

About Your Writer: Questions for your character to answer about you.

Why do you think your writer chose to write about you?
Lauren Linwood wanted to tell my story because she sees me as very vulnerable. She was fascinated by the idea that identical twins could be separated at birth and resemble each other so closely, yet turn out very differently.
What do you wish your writer had not told others about you?
I can't believe she let the cat out of the bag and told people how I donate a portion of my poker winnings to various orphanages in each town I pass through. Just because I'm an orphan and know how hard that life can be, I feel she had no right revealing something so personal.
Why do you think your writer loves to write?
Lauren loves to tell stories—the more complex and twisty, the better. She loves creating people and their worlds and sharing them with readers. She wants to entertain and make readers happy when they get that happily ever after ending. I'm grateful that despite all the complications she threw at me, I was able to find my golden ending with Lily, the love of my life, and learn about my true roots.
What do you wish your writer would write next?
When I have kids with Lily, I think their story would be an interesting one to read about. They would come of age at the turn of a new century in , so that alone would make for a special story. Besides, who wouldn't want to read the love story of their own children? Mine turned out so well, and I hope Lauren would give my kids their own soul mates for life!
What other character from your book do you think your writer should write a book about? Care to tell us why?
Lauren would never admit to this, but her two favorite characters in A Game of Chance are Harold, the butler, and Cleveland Armstrong, a bank clerk. Harold has a great sense of humor and is incredibly loyal. I think she should give him a good woman to share his laughter and love. And in the epilogue, Lauren reveals is doing something very special with his life. He's the true hero in A Game of Chance, and I believe he deserves his own book and happily ever after, just like Lily and I got.
Is there anything you'd like to say to your writer?
Lauren knows how grateful I am to her for bringing Lily and me together. We definitely had some bumps along the way, but I want her to know that I truly am the man she thought I was, and I plan to be the best man I can be, for both Lily and me. I'm ready to start a new chapter in my life, and I look forward to my future—all thanks to Lauren and her vivid imagination.

As a child, Lauren Linwood gathered her neighborhood friends together and made up stories for them to act out, her first venture into creating memorable characters. Following her passion for history and love of learning, she became a teacher who began writing on the side to maintain her sanity in a sea of teenage hormones.
Lauren's novels focus on two of her favorite eras, medieval times and the American Old West. History is the backdrop that places her characters in extraordinary circumstances, where their intense desire and yearning for one another grows into the deep, tender, treasured gift of love.
Lauren, a native Texan, lives in a suburb with her family. An avid reader, moviegoer, and sports fan, she manages stress by alternating yoga with five mile walks. She is thinking about starting a support group for Pinterest and House Hunters addicts.


Amazon Author Page: http://www.amazon.com/Lauren-Linwood/e/B00CSSG8BC
Posted by Kayelle Allen at 12:00 AM