Thank you to Kayelle Allen and the Romance Lives Forever blog for having us this week. As further thanks, Changeling Press would like to offer readers of this blog 10% off at http://www.changelingpress.com/ when you enter code Changeling@RLF2014 at checkout.

Too Hot to Handle by Shelby Morgen 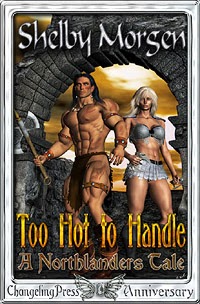 (A Northlanders Tale)
[Dark Fantasy Shifter Romance, MF]
Earth, 2486. Global warming, followed by thermonuclear winter, leaves Earth a far different planet from the one we know. New races rule the Northlands. Old races, too, have returned. In a land ruled by politics, Lady Ayailla's word is law. When Thallin defies her law, she has the perfect weapon at her disposal. She holds a marker -- to the Mercenaries Guild.
Jarla. A woman with no clan, no past, no loyalties to anyone -- except the Mercenaries Guild. Edgy, restless, the life suits her well. She can be whoever the guild needs her to be. Warrior. Thief. Spy. Today, she's a bounty hunter.
Thallin. A man haunted by his past and a grief he cannot outrun. Still, he cannot change who he is. He'll sacrifice himself to save the lives of his men, even if it means placing his fate in the hands of a bounty hunter. But Jarla's hands are interested in more than his fate. Will her touch heal his shattered soul?
Publisher's Note: Too Hot To Handle has been previously published with another house. This version has undergone substantial revisions.
Buy Now: http://www.changelingpress.com/product.php?&upt=book&ubid=203
Read Chp1 Online: http://drb1stchp.com/2013/04/too-hot-to-handle-by-shelby-morgen/
****

The Witching Hour by Marteeka Karland

[Shifter Romantic Comedy, MF]
Hazel really wants to fulfill her potential and be the witch her Grandma always said she could be. Unfortunately, though her spells alway 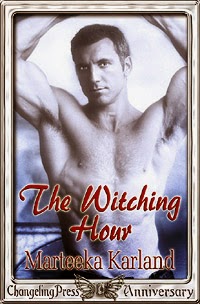 s work, they never quite work the way they're supposed to.
Drake, the hunky werewolf next door, has been dutifully watching over Hazel for the local coven. He's not convinced she's a witch, until she accidentally turns him into a dog. Of all the indignities.
Now she's got his undivided attention, and my oh my how she's grown up. Man, has Drake got an appetite for a certain witch… and it's all for her own good. After all, who ever heard of a virgin witch?
Buy Now: https://www.changelingpress.com/product.php?&upt=book&ubid=213
Read Chp1 Online: http://drb1stchp.com/2012/04/wolf-the-witching-hour-by-marteeka-karland/
****

In His Dreams by Lacey Savage

[Dark Fantasy Interracial Romance, MF]
For three centuries, 's existence has revolved around providing sexual gratification to men not of her choosing. As a concubine enslaved by a brutal master she knows only as the Conqueror, can do nothing but obey his every cruel whim. But a hundred years ago, discovered where her real talents lie. She can invade dreams; and in those dreams, she's the one in control. Not the men whose thoughts she pervades. Not the Conqueror. Just her. 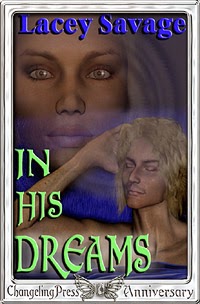 Rafe Osmond is a Dream Walker committed to eradicating every last trace of dream ragers, those whose dark arts not only terrorize, but also kill innocent dreamers. After he watches terrifying a man she's recently serviced, Rafe sets off after her -- with a vengeance. But when he finds her, he also stumbles upon a long-forgotten temple steeped in ancient mystery, and a terrifying evil.
Together, Rafe and must destroy a power darker and deadlier than either of them imagined. But first, Rafe must convince that there is more to dreams than ravages of pain and whimpers of terror... and to do that, he has to show her unbelievable pleasure...
Buy Now: http://www.changelingpress.com/product.php?&upt=book&ubid=220
Read Chp1 Online: http://drb1stchp.com/2013/05/in-his-dreams-by-lacey-savage/
****

The Magic Touch by Julia Talbot

[Urban Fantasy Romance, MF]
Trinity Broussard doesn't believe in magic. Not one little bit, a fact her family finds amazing considering that magic is their livelihood. That lifestyle teeters on the brink of extinction if Trinity doesn't get with the magical program in time for her next birthday. Trinity's aunt Lorelei is at her wits end. All of her attempts to get Trinity to go along with the plan have failed miserably.
Driven to desperate measures, Lorelei makes a last ditch effort to rev up Trinity's magical sensitivity. She calls in an expert. Nicholas Deveraux is a man with a mission, summoned by Lorelei to do her bidding. He's willing, as long as he gets his payoff in the end, and he sets about making magic real for Trinity, any way he has to. 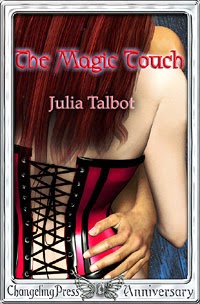 Trinity thinks Nicholas is an arrogant jerk. Nicholas thinks Trinity is an intriguing mix of magical talent and independence. Both of them feel the attraction between them, but neither of them counts on falling for each other, or on how their lives will change when Trinity begins to believe.
Buy Now: http://www.changelingpress.com/product.php?&upt=book&ubid=222
Read Chp1 Online: http://drb1stchp.com/2013/05/magic-touch-by-julia-talbot/
****

The Thing in the Basement by Jonathan Wright

(Rituals #2)
[Paranormal BDSM Romance, MF]
Samantha's in love -- with a man she can't have.
Alan Drury has everything. The perfect dead end corporate job. The perfect bitch of a corporate trophy wife. The perfect crumbling old Victorian mansion. Great, rambling old place. Anne picked it out. Thought it was the perfect place to throw a perfect corporate picnic.
Just don't go in the basement. There's something in the basement. Something down there, in the dark, behind an old brick wall. Something sleeping. Something evil. Something trapped. Trapped being the operative word. Trapped it was, and trapped it remained. Until it found a kindred soul. Until it found Alan. A man trapped... in a prison of his own making.
Sam's willing to give everything she has to save Alan from himself. And from the thing in the basement... But is her love enough to save them both?
Buy Now: http://www.changelingpress.com/product.php?&upt=book&ubid=225 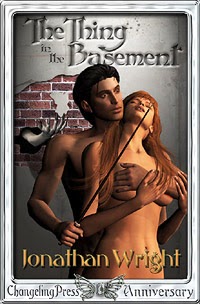 Want to write for Changeling Press?

We accept submissions from 10,000 to 35,000 words for single titles. While there should be both highly erotic and romantic elements to the book, relationships and endings should be plot driven. We don't demand your characters trot off to get married at the end of the book, though we do ask for a HEA (Happy Ever After) or, in the case of serials, a HFN (Happy For Now). Serials from unsigned authors must be submitted as a completed set.
We have only one heat level. Over-the-top hot! We can handle anything you send us as long as it meets our guidelines (Content must be legal for an over 21 audience and geared toward a primarily female readership). We do accept multiple submissions, but not simultaneous submissions.
All submissions must be received via email only at Submissions@ChangelingPress.com Expect to hear back from us in 2 weeks.
Include in the BODY your submissions email:
- A short cover letter that states your publishing history (if any)
- A short blurb with the genres and themes of your title and whether the title is a single or part of a series/serial
- A synopsis of no more than 500 words (state the ending)
- A brief promotional plan that states your website, blog, social media links and all other places where you promote
ATTACH to your submissions email:
- The complete manuscript as an RTF (Rich Text Format) or TXT (text) file. Please do not send DOCX files. Margins, spacing, and font are whichever you prefer. If accepted the manuscript will be reformatted to conform to Changeling Press style guidelines.
For more details about submitting to Changeling Press please visit http://www.changelingpress.com/submissions.php.