What's romance without a good laugh? Our authors will have you laughing until it hurts along with fanning yourself. 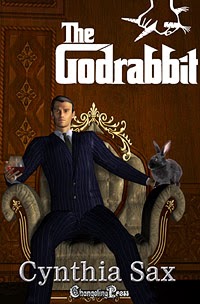 The Godrabbit by Cynthia Sax

(Protect and Serve Series)
[Shifter Comedic Romance, MF]
I am known by many names. My beloved mother called me Flopsy Lapin. Lady Grace Satin jokes that I am the wickedest rabbit in all of the world. Her father, Lord Satan, dares to label me a mobster street rabbit. You, my friend, may call me the Godrabbit.
Lady Grace is the only female I lust after. My bloodstained hands are unworthy of holding her, so when a high-class hooker with Lady Grace's face, voice, scent, and everything else, wanders into my casino, I make her an offer she can't refuse. This leads to a night I will never forget.
Note: The Godrabbit is a prequel to Protect And Serve: Badge Bunny, and is not actually part of the Protect and Serve series. We're just -- ahh -- keeping it in the family, so to speak.
Buy Now: http://www.changelingpress.com/product.php?&upt=book&ubid=1574
Read Chp1 Online: http://drb1stchp.com/2011/04/the-godrabbit-by-cynthia-sax/
*****

How Not to Date an Alien by Stephanie Burke 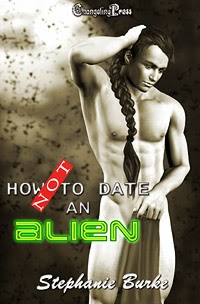 [SciFi Comedic Romance, MF]
Kilana knows what her eyes are telling her can't be true.
There's a naked man in her bed and he's glowing. And then there are the solid black eyes, the floating several feet above the bed, and the most damning of all... he has antennas.
The newly divorced Kilana thinks she's seeing things, but when he opens his mouth and tells her he's hunting humans and his intentions are to devour her, Kilana knows she has an alien problem.
But who will help her get away from the admittedly sexy creature that wants her pleasured and fattened until her flavor is perfect? Maybe her hair-brained friends Se and can help her avoid the big suppertime cut...
Or maybe she's on her own with the drooling, leering, orgasm-delivering fiend. And maybe dating an alien won't turn out to be as big a problem as she thinks.
Buy Now: http://www.changelingpress.com/catalog.php?upt=book&ufilter=series&sid=341
Read Chp1 Online: http://drb1stchp.com/category/series-how-not-date/
***** 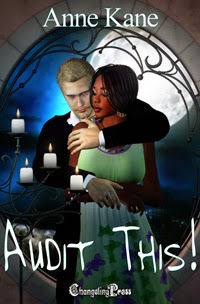 Audit This! by Anne Kane

[Contemporary Interracial Comedic Romance, MF]
When government tax auditor Nick finds himself obsessed with the work of erotic romance author Khloe Matters, there's only one thing to do. Audit her! But getting a closer look at the sexy author in her own home just makes him switch his obsession from the writing to the writer.
When he accompanies her to a writers' festival, things heat up in a hurry. Neither of them is being entirely honest, and as the weekend progresses so does the hilariously tangled webs of deceit as each of them seeks to further their own agenda.
Buy Now: http://www.changelingpress.com/product.php?&upt=book&ubid=1983
Read Chp1 Online: http://drb1stchp.com/2013/01/audit-this-by-anne-kane/
******

Don't Need a Hero by Lena

(Protect and Serve Series)
[Futuristic Shifter Comedic Romance, MF]
When cat shifter (aka Pete) becomes the victim of "friendly fire" during the apprehension of a bank robber, panther shifter cop Apollo Jones feels obligated to make sure she's okay. Pete's positive she doesn't need another hero in her life, and Apollo's out to prove her wrong.
Buy Now: http://www.changelingpress.com/product.php?&upt=book&ubid=1727
Read Chp1 Online: http://drb1stchp.com/2011/12/dont-need-a-hero-by-lena-austin/
******

Once Upon a Dragon by Dawn Montgomery

(WTF Dragon #1)
[Dragon Shifter Comedic Romance, MF]
Five Princesses. Five Dragons. A coincidence? I don't think so.
In the fairytale (or WTF for short), fairytale folk have gone insane. With the imps of lust and wickedness on a rampage, no one is safe.
The Quest: Save the world. With sex... and magic? Definitely.
The Complication: Sex is deadly. Magic is broken. And nothing is going right. 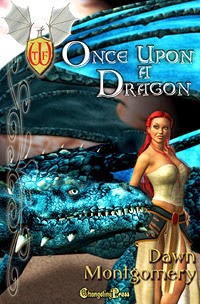 Captured by an evil queen, chained to a sexy he-man of incredible proportions, and forced on a quest that no sane person would take, Princess Penelope must travel the treacherous swampland of Andvari. A terrible place of twisted magic where sex and murder are forbidden.
Shane Masters, on the other hand, believes every curse has its loophole, and every rule has a bend.
When their passion ignites, nothing can stop them. Not even death.
Buy Now: http://www.changelingpress.com/product.php?&upt=book&ubid=1845
Read Chp1 Online: http://drb1stchp.com/2012/04/no-dragon-no-problem-by-dawn-montgomery/

For details about submitting to Changeling Press please visit http://www.changelingpress.com/submissions.php.
Posted by Kayelle Allen at 12:00 AM