Admit it. Everyone loves a bad boy. Well these demons are the ultimate bad boys. 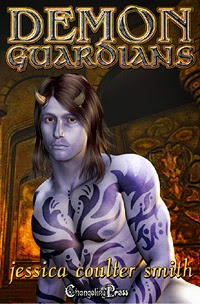 Or Current Resident by Zenobia Renquist 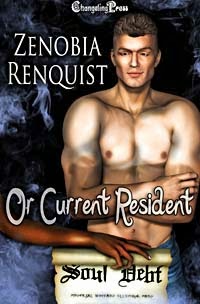 didn't know what she was in for when she took over her friend's lease. She thought she was getting a perfect apartment with reasonable rent. And then a demon shows up on her first night, demanding the sex that's owed him. That's when she regrets not reading before she signs, though she doesn't regret it long.
The landlord made a deal with August -- an entire apartment complex as his sexual playground in exchange for personal gain. is August's latest acquisition, and his prowess has her eagerly awaiting his return. She happily meets his every challenge because the second she refuses, he'll drop her into Hell to satisfy his many brothers instead.
With the end of the lease approaching, discovers emotions developing for a demon who could probably never return her feelings. The terms of the agreement are simple, but she's planning to negotiate for an extension with an option for love.
Buy Now: http://www.changelingpress.com/catalog.php?upt=book&ufilter=series&sid=393
Read Chp1 Online: http://drb1stchp.com/category/series-soul-debt/
****** 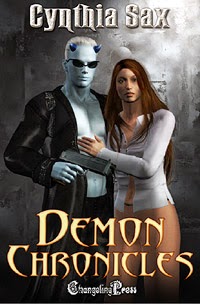 [Urban Fantasy Voyeurism/Exhibitionism Romance, MF]
Maximus, a powerful blood demon, thinks he has seen everything... until a sexy vessel dances into his nightclub. Mina has to bond with a demon. She resigns herself to a passionless bonding of convenience... until one kiss changes everything. To save his sister, Augustine has to bond with a vessel. What he finds is a beautiful woman with a fondness for exhibitionism and a sexual appetite to match his own. Hadrian can't remember the last time he had sex. Then he meets Claudia, a demon so powerless she's almost human, and his interest in all things sexual reemerges with a vengeance.
With ancient demons, sex really does get better with age.
This collection contains the previously released novellas Demon on the Dance Floor, Demon of Convenience, This Enchanted Demon, and Demon for All Time.
Buy Now: http://www.changelingpress.com/product.php?&upt=book&ubid=2184
Read Chp1 Online: http://drb1stchp.com/2014/01/demon-chronicles-collection-by-cynthia-sax/
****** 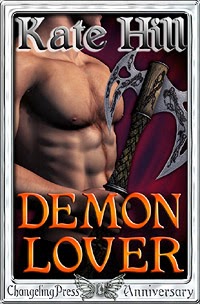 When John Standcliff, Hell's bounty hunter, is summoned to Earth to claim the soul of a serial killer, he finds the worst of hell's tortures can be no worse than the pain of falling in love with a mortal woman.
Corinne Rogerio has come to to research six murders that took place back in 1656. She has no idea that the handsome stranger she meets in an old cemetery is actually the murderer she's been studying. Even worse, he's been sent to track down a serial killer who is closer to her than she ever imagined.
Buy Now: https://www.changelingpress.com/product.php?&upt=book&ubid=46
Read Chp1 Online: http://drb1stchp.com/2012/10/demon-lover-by-kate-hill/
****** 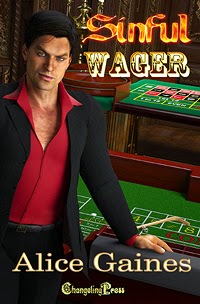 [Paranormal Romance, MF]
Marty takes a wrong turn in the casino called and winds up in a place where the machines pay off with hot sex and everyone wins. Turns out she's in hell, and finds the sexiest guy there. With all that going for the underworld, who'd want to go back to reality? She makes a deal with him -- if she can make him beg for the privilege of giving her an orgasm, she gets to stay on as his partner.
He doesn't need a partner, but this woman gets his libido hot and bothered, something that hasn't happened for longer than he cares to remember. Besides, her ideas for running the casino have the place humming. He takes her challenge and finds, to his chagrin, that he can't seem to win.
Buy Now: http://www.changelingpress.com/product.php?&upt=book&ubid=1739
Read Chp1 Online: http://drb1stchp.com/2011/12/sinful-wager-by-alice-gaines/

For details about submitting to Changeling Press please visit http://www.changelingpress.com/submissions.php