Climbing out of Hell begins with tossed from his limo onto a NYC sidewalk. 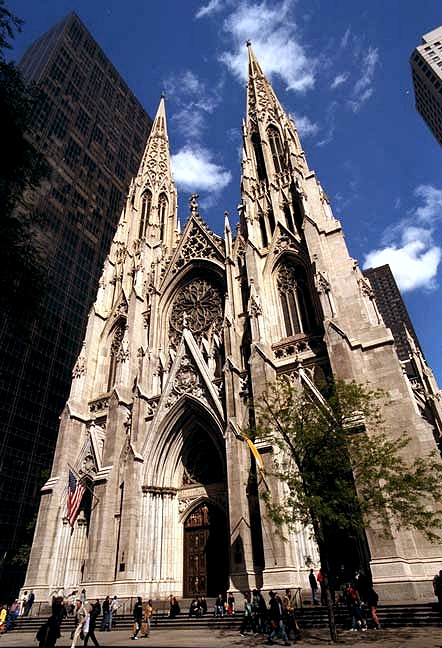 A priest asks if Trent need help. Thinking he needs an exorcism, follows the priest back to St Patrick's Cathedral.
In my story, the Cathedral has already finished its current $177M restoration project. Otherwise, would have been appalled by all the scaffolding and walked out. He needs to be impressed. So I have gently played with time to allow St Patrick's be at its most impressive.
However, I've two real building lessons for you:
Projects always costs more than estimated.
And they take longer to complete than anticipated.
Initial estimates to build St. Patricks were $850K for the building. (They left out the cost to furnish.) The cornerstone was laid in 1858. For three years the work progressed rapidly.
Then in 1861, our country decided to fight with itself. (Civil War) All work stopped until the war ended in 1865 and our country recovered sufficiently that people could afford to build pretty things again.
In 1878, they finally had a section of the building that could (as would say) do its job, if only it had furnishings. To resolve that, they had a fund raiser to help purchase furnishings for the Cathedral and a year later it formally opened. The papers declared it the noblest building ever built to honor St. Patrick.
This claim doesn't impress , because when he thinks of St. Paddy, he thinks of short, drunken Irishmen stumbling down the street, wearing green. (What can I say, he's not Catholic.)
The gorgeous spires weren't completed until 1888. (30 years after they began.)
They finished the Lady Chapel in 1906, furnished it by 1908. The first of the stained glass windows was installed in 1909, and the remaining windows arrived over the next 25 years. I'm going to assume they had plain glass in the windows until the stained glass arrived. Otherwise it would have been a bitter cold place to worship for a really long time.
By 1910, with only one stained glass window install, it is estimated that over $4 million dollars had been spent on the church that was supposed to only cost $850K. That's a 470% overrun. Thus, proving lesson number 1. (See above if you've forgotten it already.)
For the next 24 years, they installed glass stained windows, imported from . 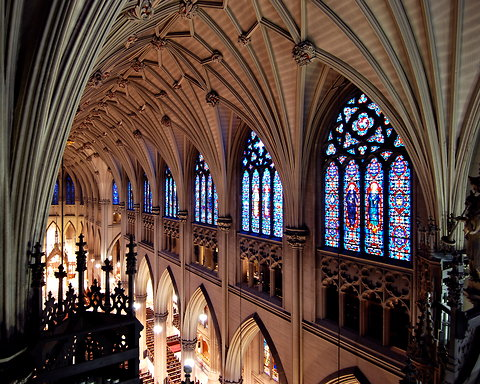 You might wonder why they declared it finished in 1910 instead of 1934 when the final window gets installed. Here's my guess: They needed major repairs and it is embarrassing if the cathedral you are building requires major repairs before you have finished building it.
In 1927, when the stock market was booming, they began the first of many major renovations. Clearly, they raised their funds just at the right time. Two years later, the stock market crashed and NYC was in dire straits for the next ten years. Not surprisingly, no further repairs were done until the world recovered financially.
The second attempt at renovation took place in 1941-47.
Then in 1972, they claimed to have restored the interior and in 1979 the exterior. Thus, it's all fixed now right?
Wrong.
1984-2000 they had to do extensive renovations to maintain the structural integrity of the building. (The roof and steps needed replaced)
Which leads us to the project begun in 2012 that is planned to be finished by 2015. (Remember Lesson 2?)
Due to all those years of buying stained glass, there are now more than 1,300 PANELS of stained glass that require attention during this renovation.
This drawing of the central entryway gives a sense of how much work is planned. Each box indicates where a repair, repointing, or entirely new stone is needed. 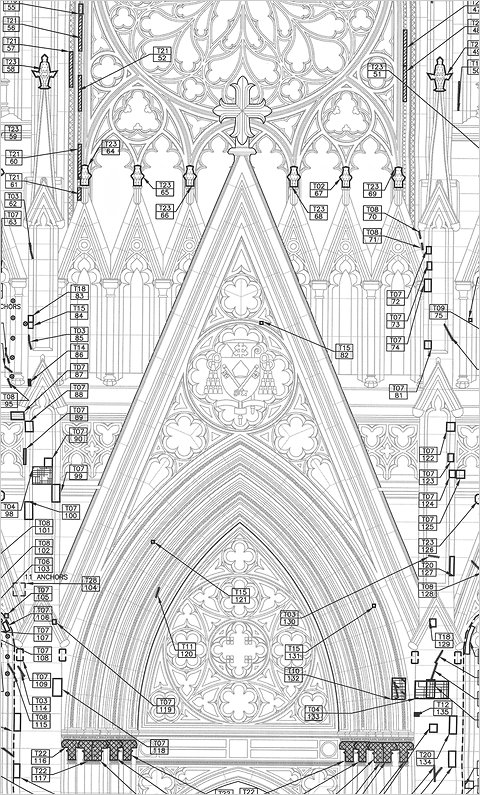 This is just one little section of a very large church. In case you are curious, Restoration costs are estimated at $177 Million dollars.
I hope they don't overrun by the same percentage they did in the first estimate. If so, it will cost nearly $832 million dollars. Hopefully, they'll only overrun by 20%, costing the church $212 million.
Which bring me to my final lesson:
Old structures are money pits, and the cost of renovations will far outweigh the cost of a new building. But there is something special about this gothic cathedral, and regardless of the cost, I believe it should be preserved.
Now back to and his attempt to climb out of hell...
(picture of cover)
Climbing Out of Hell
Book 4 of the series
A Long Road to Love
Romantic Comedy
Billionaire Trent Lancaster has destroyed his relationship with the only woman who ever loved him. Now we discover the full truth of what happened.
He actually had reasons for his behaviors.
Still, there is no going back. has lost Carrie forever, but he would rather die than marry , so he does just that. gives away most of his possessions, fakes his death, and starts over with a new face and a better attitude in a small town in where his half-brother Sam is sheriff.
Losing his true love has fundamentally broken to his core. His only chance for happiness is to become the better man Carrie had always seen inside him.
True change is not easy. Can grow up and become a man we can love?

stood before the five-story apartment building. Taking a deep breath, he entered.
And climbed stairs
And more stairs.
God in Heaven, why doesn't this building have an elevator? The workout could kill a person.
Out of breath and exhausted, he knocked on Jon's door.
No answer.
He tried again.
Still no answer.
He pressed his ear to the wood and could hear rapid clicking inside. Certain Jon resided within, pounded on the door.
Five seconds into his pounding, Jon glared at him in fury. "What the hell do you want?"
"I need to talk to you."
"Not interested," he snapped and tried to shut the door, but slid his foot forward so it got crushed instead. He flinched from the pain, but resisted cursing. "Jon, we need to talk. I need to explain."
"Save it. No explanation can justify your actions."
"You're right. What I did was beyond forgiveness. But I need to help you get beyond the damage I caused."
"How? According to my sources, my boys are getting the shit kicked out of them at school when they object to the 'who's your daddy' and 'how much is your momma' jokes, and Patty blames them for the whole mess."
"Which is why I have to make amends. Let me in so we can think about how we might save your kids."
After a long, angry glare, he stepped back and let enter. "Let's get this over with so I can get back to writing." Jon stormed through an archway into a narrow galley. followed and discovered what had to be the world's tiniest kitchen. Upon a ding of the microwave, Jon extracted a mug, took a sip, and glared at him.
took in a deep breath and began. "First, I want to apologize for ruining your life and your sons' lives while attempting to save mine.
"Apology unaccepted. You can leave now."
"No. I don't expect you to forgive me. I destroyed your life. You were my best friend who wanted to help me, and I screwed up everything." 's vision blurred. He walked to a small, dirty window and stared out, not wanting to cry in front of Jon. "If I could redo the last three months, I would."
Jon huffed. "No. You'd do the same thing again because it's all about you and what you want."
wanted to argue that it had been about his desire to protect Carrie, but he stopped. He could have let her go. He'd chosen to destroy everyone else's life in a final attempt to keep her. So it had been all about him.
"You're right. I should have declared defeat at once and sent Carrie packing, but I couldn't. She was the first person who ever loved me."
"So you destroyed my innocent boys' lives and lost her anyway."
He turned and faced his former friend. "If I could undo what I did, I would, but all I can do is try to lessen the damage from this point forward."
"How do you plan to do that?"
"I spoke to Patty today."
Jon's face flushed crimson. "You're still seeing my wife?"
"No, she hates me more than you do. I called to get your address. She blamed me for your boys being bullied and tormented at school."
"Yeah, the article in Gossep didn't play well in the burbs."
"I think they'd be better off here in the city. They need you, Jon. You're a fabulous father."
Jon slammed his cup into the kitchen sink, causing it to shatter. "You should have thought about that before you destroyed my marriage."
"You're right. I caused this. Nothing I can do will change what happened, but you deserve compensation. I want to sell you the penthouse for one dollar. You can bring Patty and the kids back and let them stay there, sell it…whatever you want."
He snorted. "I couldn't afford the first month's maintenance fees on the place."
"I'll set up three trust funds. One for the boys' educational needs, a second for maintenance fees and servants for the penthouse, and a third to cover the gift taxes the government will require when I set up the other two things. I'll have my accountant and lawyers work the details so I don't screw it up. I want to make this as right as I can. What I did was unforgivable and I know I've lost your friendship forever. But you will always be the best friend I ever had."
Jon stared at him in silence.
"I'll let you get back to your writing now." let himself out. He'd hoped for a better response, some indication Jon intended to accept the gift, but he would follow through all the same.

Link to a separate contest: http://www.lizaoconnor.com/p/climbing-out-of-hell.html

Just Released May 1, 2014
Book Four of the series:
A Long Road to Love
Climbing out of Hell
Amazon
Other books in the A Long Road to Love series
Book One
Worst Week Ever
Amazon
"Love this book and couldn't stop laughing from beginning to end." 5 stars – Alves - Amazon
Book Two
Oh Stupid Heart
Amazon
"Be warned though, this book is completely different from The Worst Week Ever. Yes, there is still humor, dry wit, situations that you would think...NOT AGAIN but this one humanizes more." 5 stars - Brian's Mom – Amazon
Book Three
Coming to Reason
Amazon
Once again, Ms. O'Connor has written a brilliant book about the complexities of relationships, good and bad. Again, to me, the book is the best break up book EVER and it left my heart singing in the end. Best.Book.Ever…
Other Books by Liza O'Connor
Saving Casey
Ghost Lover