About the Book
Title: Exodus 2022
Genre: SciFi Eco-Thriller
Author Name: Kenneth G. Bennett
Book heat level (based on movie ratings): R, due to violence, no sexual scenes
Joe Stanton is in agony. Out of his mind over the death of his young daughter. Or so it seems.
Unable to contain his grief, Joe loses control in public, screaming his daughter's name and causing a huge scene at a hotel on in . Thing is, Joe Stanton doesn't have a daughter. Never did. And when the authorities arrive they blame the 28-year-old's outburst on drugs.
What they don't yet know is that others up and down the Pacific coast—from the Bering Sea to the —are suffering identical, always fatal mental breakdowns.
With the help of his girlfriend—the woman he loves and dreams of marrying—Joe struggles to unravel the meaning of the hallucination destroying his mind. As the couple begins to perceive its significance—and Joe's role in a looming global calamity—they must also outwit a billionaire weapons contractor bent on exploiting Joe's newfound understanding of the cosmos, and outlast the time bomb ticking in Joe's brain.

Tell us about yourself, please.
My name is Joe Stanton and I am a 28-year-old Episcopal Priest. I am in love with a beautiful woman named Ella Tollefson.
What is it that you want, but cannot have? Authors call this the conflict of the story. I began suffering from severe hallucinations a few days ago. I want to figure out what's causing them and make them stop.
What's your internal limitation? Meaning, what is it about you that makes it so you cannot do what it is you need to do during this story? My internal limitation is lack of understanding. I'm only just beginning to unravel the cause of the sudden hallucinations and the deeper mystery behind them.
What inner doubt causes you the most difficulty? I fear for Ella's safety. I fear that I'm endangering the person I love most in the world.
What's your external complication? In the story world your author created, explain what it is you fear most. I fear the loss of all that I love and hold dear.
Tell us about your significant other, that person who makes living worthwhile. Ella Tollefson is a beautiful young woman whom I met in the wilderness—in Olympic National Park in . Ella is sweet, kind, funny, athletic and intelligent. She's a registered nurse, working to become a nurse anesthetist. I love her more than anyone I've ever met. I'm crazy about her.
What would that person say about you? She loves me. She likes my weird sense of humor. We laugh a lot when we're together. I'm sure I get on her nerves sometimes but she is amazingly patient.
What is your family like? I'm an only child and my folks live on the East Coast. They've come to visit me a couple of times out here in . We get along great. They're proud of my achievements and the spiritual vocation I've selected.
What special skills do you rely on? Intuition. Faith. I'm a skeptic, and my church is super progressive, but I do believe in a higher power.
If someone from your past showed up, who would you NOT want it to be, and why? An old girlfriend. Ella might not be too happy about that.
Are you happy with the way your story ended? Why or why not? Yes, very. Readers keep asking about a sequel, and that makes me happy.

You have the length of a tweet (140 characters) to describe yourself as a writer. Let's see what you can do.
I herd words. My Australian Shepherds herd me. My first book, THE GAIA WARS, was optioned for a movie.
Why do you write?
To make a living. I've made my living as a professional ad copywriter for the past 20 years, working for clients such as Volvo, Disney, Starbucks and Amazon.
What do you want to write next?
I'm working on a sci-fi thriller called THE HEALER, about a man who discovers later in life that he has a unique healing power—a power that could change the world.
Are any sequels planned for this book?
I wasn't planning on a sequel to EXODUS 2022 but a lot of readers are asking for one. I think that's fantastic and I would love to oblige.
Is there anything you'd like to say to your readers? Thank you for your interest and for considering my work!

Kenneth G. Bennett is the author of the young adult novels, The Gaia Wars and Battle For Cascadia, and the new sci-fi thriller, Exodus 2022. A wilderness enthusiast who loves backpacking, skiing and kayaking, Ken enjoys mysteries, science fiction, action adventure stories and, most especially, novels that explore the relationship between humans and the wild. He lives on an island in the with his wife and son and two hyperactive Australian Shepherds.
The Gaia Wars series was optioned for film by Identity Films, LA in 2012, and both Gaia and have been featured as Top 100 Bestsellers in Teen Literature and Fiction on Amazon. Kirkus Reviews called The Gaia Wars "A solid first entry of a promising, imaginative new young-adult fantasy series featuring a well-crafted character." 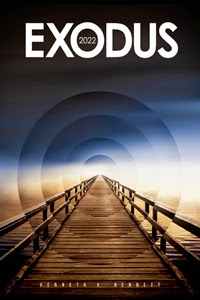