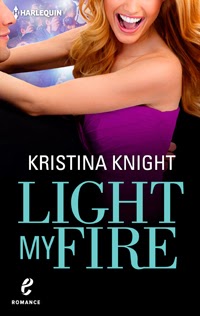 Light My Fire by Kristina Knight
Book heat level (based on movie ratings): R
Lily MacIntyre's life is offtrack, and she knows exactly how to right it: shed her 's sweetheart image in a big way. Getting down and dirty in a limo with rocker Nate Lansford seems like the perfect solution. Plus, she's had a mad crush on him practically since birth. The only problem? Nate is her brother's best friend...and he doesn't see her as anything other than a surrogate little sister.

Why did you write this book?
I've had a love affair with music all my life. It started with the Beach Boys (which my mom introduced me to when I hit high school) and then the pop stars of the late 80s/early 90s (with some hair metal thrown in). Rock stars fascinate me, so when Nate popped into my head I knew I had to write his story!
What is your favorite genre to read?
I read across genres, depending on my mood...but probably 60% of my reading is contemporary romance. Because who doesn't love a boy-meets-girl story?
What is your favorite character from fiction (not including your own characters)?
So many! But Samantha Jellicoe, from the Suzanne Enoch 'Billionaires' series is right up there at the top. She's feisty, spunky and just a little bit broken, but she also has a code and she lives by it. Love that!
Do you enjoy films and/or TV shows? Which are your favorites?
Yes, to both! A few of my faves are NCIS, Revenge, any chic-flick film …and I love the Romancing the Stone movies from the 80s. They're a little clichéd and some of the acting is silly...but they're still so good!
What are you working on at the moment, and what are we likely to see from you in the coming months?
I have 2 more rocker books, coming out in a few months with Harlequin E and I just put the finishing touches on my very first SuperRomance from Harlequin, which should be out in early 2015. So I'm in a little bit of editing/revisioning limbo, but in my spare time (HA!!) I'm working on another contemporary about a cowboy and a masseuse that I'm having so much fun with!
Please tell us about your latest book.
Light My Fire is a friends-to-lovers/brother's best friend book set in the glamorous world. Lily is desperate to change her image, and she's had a mad crush on Nate, her brother's best friend and a rock star, for years. She thinks he's the ticket…but she doesn't count on falling for him…

Lily MacIntyre needs to shed her sitcom teen-queen image if she's going to carve out a real career in . A tabloid-worthy fling with rocker Nate Lansford—her childhood friend and new cohost of a reality talent show—should do it. As long as she can accept that the notorious player will be moving on to the next eager conquest when the season wraps.
Long before Nate's hard-hearted image took hold, he and Lily were each other's protectors and allies. No one knows him the way she does—and he doesn't want his messed-up past to muddy up her potential. For once, the bad boy is trying to be good. Not easy when the good girl is getting wicked with him in the back of his limo, and every white-hot kiss proves they can never be "just friends" again…

Nate smiled at her. "Still putting on a show?"
She could only shake her head.
"Because I'm about through watching it."
Her belly twisted at the innuendo. "Sometimes you have to be part of the sh—"
He put his index finger over her lips. "No quippity-quips. Not now, Lil. Let's just dance, okay?"
Her lips burned under his finger, but she nodded and slid into his arms as the DJ switched from bass-thumping fun to guitar-sensitive slow.
Nate slid his hands beneath her coat and reached under the camisole to play with the sensitive skin at the small of her back. And she melted into him. Lily rested her head below his shoulder and twined her fingers with his. She sighed at the rightness of being in his arms, even in the middle of a crowd and fully clothed.
He played his fingers along her sides like a piano and then worked his way around to the small of her back again, burning her from the outside in. Lily swallowed. She might want Nate, but she wasn't ready for him.
Wasn't ready for whatever this was building between them.
A small part of her still wanted the Nate she remembered—the boy who stood up to school-yard bullies for her, who smiled at her and only her while he performed before the rest of the student body in talent shows. The boy she shared her lunch with, the boy who took her to the senior prom when Bailey Yeardley stood her up at the last minute. She had so many memories with Nate, and almost all of them also involved her brother. What if whatever this was messed up not only her friendship with Nate, but also Chase's?
Her waking up a year ago and realizing the boy she'd grown up with had become a heart-stoppingly attractive man didn't mean a thing . He was still her brother's best friend. He might be the guy who would give the reporter's something to talk about besides her show being cancelled, but that wasn't a good enough reason to act. Not if they couldn't salvage their friendship when this lust train arrived at the next station.

Once upon a time, Kristina Knight spent her days running from car crash to fire to meetings with local police--no, she wasn't a troublemaker, she was a journalist. Her career took her all over the , writing about everything from a serial killer's capture to the National Finals Rodeo. Along the way she found her very own Knight in Shining Cowboy Boots and an abiding love for romance novels. And just like the characters from her favorite books, she's living her own happily ever after.
Kristina writes sassy contemporary romance novels; her books have appeared on Kindle Best Seller Lists. She loves hearing from readers, so drop her a line!


Google+: https://plus.google.com/+KristinaKnightAuthor/posts
Posted by Kayelle Allen at 12:00 AM