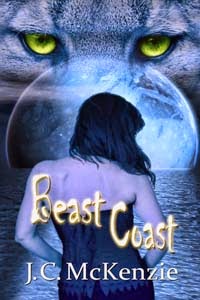 The signs in the zoos saying 'Don't Poke the Dangerous Animal' never applied to Andy McNeilly.

Title: Beast Coast
Series Name: Carus Series, Book Two
Publisher: The Wild Rose Press
Editor: Lara Parker
Cover Artist: Debbie Taylor of DCA Graphics
Genre: Urban Fantasy/Paranormal
Book heat level (based on movie ratings): PG13
When Master Vampire Lucien Delgatto threatens her potential mate Wick's life, Shape Shifter Andrea "Andy" McNeilly will employ a den of witches, a bedazzled thong, and her ability to shift into multiple animals to meet his demands. She plans to keep Wick safe—even if she's not speaking to him. Lucien's unwelcomed control over Wick's life has thrown Andy into a whirlwind of emotions.
Though Wick vows to do whatever it takes to earn Andy's forgiveness and win back her trust, it may be too late. This recent conflict awakens something within Andy, an animal she's never learned to control. For hidden beneath all her forms is a beast whose anger and brutality rivals none.
And she's pissed.

Born and raised on the Haida Gwaii, off the West Coast of Canada, J.C. McKenzie grew up in a pristine wilderness that inspired her to dream. She writes Urban Fantasy and Paranormal Romance.