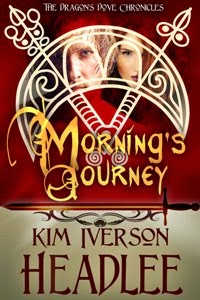 Kim Headlee lives on a farm in southwestern Virginia with her family, cats, goats, Great Pyrenees goat guards, and assorted wildlife. People and creatures come and go, but the cave and the 250-year-old house ruins—the latter having been occupied as recently as the mid-twentieth century—seem to be sticking around for a while yet.
Kim is a Seattle native and a direct descendent of twentieth-century Russian nobility. Her grandmother was a childhood friend of the doomed Grand Duchess Anastasia, and the romantic yet tragic story of how Lydia escaped Communist Russia with the aid of her American husband will most certainly one day fuel one of Kim's novels. Another novel in the queue will involve her husband's ancestor, the seventh-century proto-Viking king of the Swedish colony in Russia.
For the time being, however, Kim has plenty of work to do in creating her projected 8-book Arthurian series, The Dragon's Dove Chronicles, and other novels under her imprint, Pendragon Cove Press.
What's your favorite down-home family style meal?
Steak and peppers, a recipe I learned from my late mother-in-law, which I can now make just about with my eyes closed.
What is your go-to meal when you dine out?
Sushi, especially on half-price days at our local Japanese restaurant.
Describe the perfect vacation.
A hotel on the beach—any beach—in the off season, when it's not so murderously hot or crowded, where I don't have to cook =or=clean! The longer the stay, the better.
Tell us about your favorite toy as a child.
It's a white teddy bear that I carried everywhere from the moment I could pick it up. I left it underneath the tree in our yard when we moved—I was all of a year old when that happened. Several weeks later, the neighbors found it and mailed it to us. Teddy now sits in a place of honor on the shelf above my bedroom's fireplace; no more nights out in the cold & rain for him!
If the hero of your latest book called you on the phone, what would be a perfect ringtone for him?
"Russian Easter Overture" by Nikolai Rimsky-Korsakov, the really heroic-sounding part in the middle. It always reminds me of Arthur galloping to the rescue!

Title Morning's Journey
Genre Historical Fantasy Spiritual Romance
Author Kim Headlee
Book heat level (based on movie ratings): PG13
In a violent age when enemies besiege Brydein and alliances shift as swiftly as the wind, stand two remarkable leaders, the Caledonian warrior-queen Gyanhumara and her consort, Arthur the Pendragon. Their fiery love is tempered only by their conviction to forge unity between their disparate peoples in order to create an impenetrable front to protect Caledonia and Brydein from the land-lusting Saxons and Angli raiders.
But their biggest threat is an enemy within: Urien, Arthur's rival and the man Gyan was treaty-bound to marry until she broke that promise for Arthur's love. When Urien becomes chieftain of his clan, his increase in wealth and power is matched only by the magnitude of his hatred of Arthur and Gyan, and his threat to their infant son.
Morning's Journey, sequel to the critically acclaimed Dawnflight, propels the reader from the heights of triumph to the depths of despair, through the struggles of some of the most fascinating characters in all of Arthurian literature. Those struggles are exacerbated by the characters' own flawed choices. Gyan and Arthur must learn that while extending forgiveness to others may be difficult, forgiveness of self is the most excruciating—yet ultimately the most healing—step of the entire journey.
Narrated book trailer: https://youtu.be/Bk0uPDfq7TY (with older cover by Jennifer Doneske and Joe Calkins)