The River's Embrace by A. Silenus 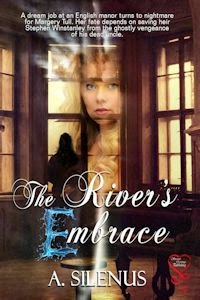 With her blond tresses and blue eyes, London fabric retailer Margery "Margie" Tull is used to being admired. When she's hired to decorate a riverside manor house though, she suspects ulterior motives.
Lord of the manor Percival Winstanley reveals a long ago love triangle leading to death and the bewitching of his son and heir Stephen. Margie's cousin Shyan is supposed to protect her. But he's lured away by Winstanley's cougarish housekeeper, Mrs. DePlessey, leaving Margie in the dubious care of servant Kern.
Unsure whom to trust, Margie turns first to artist Raphael Watts, also working at the house. Meanwhile Stephen hovers in the background trying to draw her attention to a cottage across the river. Somehow the women who live there are a portent of Margie's fate. If only Stephen can convince her of what lies in store Margie can give new hope to the manor and its heir.


For more about Silenus and his work, please go to his blog: Basic Writes: http://asilenus.blogspot.com/
Posted by Nicole Morgan at 7:00 AM

Email ThisBlogThis!Share to TwitterShare to FacebookShare to Pinterest
Keywords: A Silenus, PNR, The River's Embrace