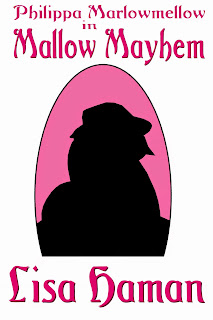 This interview is designed for your hero or heroine to tell readers about himself or herself.
Tell us about yourself, please.
Well…I'm Philippa Marlowmellow. I'm a private detective. I live in Mallowtown. I work and live in the Pink.
What is the Pink? Did you grow up there?
Oh no. I didn't grow up in the Pink. The Pink is the seedier side of Mallowtown. It's a dangerous place to be. No one really chooses to live in the Pink. You just kind of end up there.
How did you end up in the Pink?
I had a great time growing up. I lived in the burbs, went to the right schools. Had the right friends. When I was in college, my roommate and best friend disappeared. They found her body in the Pink. She was…she was…well, anyway, I changed my major from education to criminal justice, but I couldn't leave her murder alone. I had to find out what happened. And I did. I quit school and got my detective's license. I live in the Pink because that's where most of the mallows need help.
Authors call what you want but cannot have "the conflict" -- what is yours?
Hmmm…that's a hard question. Sometimes I want to go back to my other life and unsee the things I've seen. I have a love/hate relationship with the Pink. Sometimes I want to go back to the suburbs, live in a nice graham cracker house with a white sugar picket fence, marry a successful mallow and have 2.5 chicks, but then there are the mallows that need my help. Those who don't have anyone to look out for them; it's hard.
What can you not do (but need to do) during this story?
I think I did everything I could do during this story. It's hard not to be a bunny when trying to get into stripper joints, since chicks don't make good strippers. I don't think we're limber enough.
What inner doubt causes you the most difficulty?
That I will miss something in an investigation and some mallow gets hurt.
In the story world your author created, explain what it is you fear most and why.
That I will lose my sense of self. I don't want to be that jaded chick who thinks the world is an awful place. I've seen some pretty bad things, but the world is still a beautiful place.
Tell us about your significant other, that person who makes living worthwhile.
Right now I don't have one…although there is this chick at the MBI who is really cute.
What would that person say about you?
Right now this mallow would say I'm crazy and likes to get into trouble.
What is your family like?
I have a great family. My dad is a banker and my mom is a stay-at-home mom. We were pretty boring. We were that typical suburban family. I have a sister, which is good. My parents worry and they can dote on her, the normal one. (she laughs.). She had a temper, and when she blew…oh my. My dad used her craft scissors to cut up some licorice rope. You don't mess with my mom's craft scissors. I thought the roof was going to come off the house. It was short lived and they made up. My parents never stayed mad at each other. They encouraged us to be our best. They may not like what I do, but they support me the best they can.
What special skills do you rely on?
My mallow senses. They tingle and I know something's not right. They've kept me out of trouble and help when I need to investigate something further.
If someone from your past showed up, who would you NOT want it to be, and why?
I don't want to be a cliché and say Big Bunny, because he's nothing to me. I don't think I have anyone that I wouldn't want to show up. Like I said, I grew up in a pretty boring suburban setting.
Why are you happy (or not happy) with the way your story ended?
Why wouldn't I be happy with the way my story ended? I love the way it all came together. I was the heroine, along with Jenny. The bad mallows went to jail, Easter Bunny was saved and all is well with the world…at the moment.

Lisa Haman lives in the suburbs of Atlanta with her wonderful husband, two beautiful children, and two cats, O.C. and Koko. Koko loves to help her to write on occasion by sitting on the keyboard of her laptop. Lisa plays electric bass, aka Kitty Blue, with the praise band at her church. Although she doesn’t design her own patterns, Lisa creates beautiful pictures with counted cross stitch, which more often than not go to family and friends. Lisa’s interest in the paranormal fuels her imagination. She likes to scare herself silly with reality ghost series on television. She likes to write wherever her imagination takes her, but focuses on young adult fiction. She also is working on her first paranormal series for young adults yet to be titled. Her first novella, Fat Farm, is a work of speculative fiction, takes us on a journey where beauty is important and being overweight sends you off to a fat farm, where you may or may not return. Lisa’s favorite quote is from Robert Frost. “Two roads diverged in a wood, and I, I took the one less traveled by, and that has made all the difference.” Lisa takes the road less travelled in her stories.

What was your biggest challenge in writing this book?
I originally wrote this as a writing exercise that got away from me. The story contained all the original candy names. I learned I couldn’t use those names because of trademark issues, so coming up with other names for the candy was tough.
Why did you choose this character for the interview today?
I think Philippa is a neat character. I watch a lot of shows like NCIS, Elementary, and I like how they solve crimes. I like to know what is going on. I'm kind of nosy and unfortunately my sense of right and wrong won't let me get into people's business, so I let Philippa do it for me.
Are any sequels planned for this book?
Yes. She's a fun character and I want to find out more about her.
What would your readers be surprised to learn about you?
During Christmas I will watch every version of the movie of A Christmas Carol I can find. It could be the good ones with Alastair Sim and Patrick Stewart, to the cheesy ones, and the really bad ones. The funny thing is I've never read the book. It's on my to-read list.
Why should readers who haven't picked up one of your books before give this one a try?
It's fun. It's total escapism. It's a fun detective story that is off the wall and cool.
Is there anything you'd like to say to your readers?
I'm glad you are out there. I'm a reader and have loved books all my life. My goal as a writer is to tell a good story and have people enjoy them. I hope you enjoy mine.

Title Philippa Marlowmellow in Mallow Mayhem
Genre Detective Noir
Author Lisa Haman
Book heat level (based on movie ratings): PG13
Philippa Marlowmellow, a private chick working the seedy underbelly of Mallowtown known as the Pink, takes on a missing mallow case of one Jenny Bunny. With her mallow senses tingling, Philippa finds more than the missing mallow. To save her city and rescue Jenny, Philippa must take on the mobster, Big Bunny, and solve the most notorious case in Mallowtown history.
You can't trust anyone in The Pink.