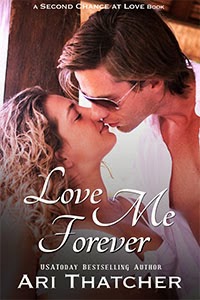 Title Love Me Forever (Part of the Summer Lovin’ Anthology)
Genre contemporary romance
Author Ari Thatcher
Book heat level (based on movie ratings): R
He said he'd call, but that's probably the standard line after a vacation romance. Still, she'd thought they'd had something more. When the call never came, she packed away the memories of that amazing summer, and tried to forget about Matt Brashiers.
Years later, rather than watch the ink dry on her divorce papers, Jennifer Pearson escapes to that Maui resort where she'd met her first love. When Matt walks out of the waves like a golden sun god she isn't sure whether she should approach him or flee.
Matt thinks of Jenn as the one who got away, and he's not about to let it happen again.
The connection between them is still palpable, but is it enough to rekindle what they had between them ten years ago? He's got one week to prove to her he's the man she needs to spend her life with.

Name: Matt Brashiers
Age: 31
Gender: Male
Birthplace: Oakland, CA
Profession: resort owner/hotelier
Welcome to Romance Lives Forever. Your author introduced you. Now we'd like to get to know you better. Please tell us about yourself.
I’m a former day trader who traded‑so to speak‑that frantic lifestyle in to work in the hospitality services area. Having spent a few summers in college working at a resort on Maui, I sold off most of my stuff, left New York and moved to Maui. I love the ocean, any form of water, really. Surfing, jet skis, swimming, love ‘em all!
Never married, although I came close once. I think I compared them all to Jen, who I met one summer in Maui. I admit it, I worked too many hours trading stocks to be a good romantic partner, so it’s not surprising none of those relationships worked.

When someone dies, we say they "kicked the bucket." Therefore, a list of things that a person wants to accomplish, places to go, situations to experience, and so on have become known as a "Bucket List." We'd like to know yours, please. If you haven't made one before, perhaps now would be a good time. Who knows? It might inspire another book. While you're at it, how about telling us about some of your other favorite things? Here are the questions.
What are two places you would like to visit before you die, and why?
Karangmadjat Island, Indonesia is said to have some of the best waves in the world. I hope to try one of the left-hander beaches one day.
I also want to surf Bundoran Beach in Ireland. Yeah, it’s cold, and it’s a matter of luck being there when the waves are better than average, but man, it’s Ireland! I’d have to do an island-wide pub crawl while I was there.
Where is a place you would never like to return, and why?
Trona, California. I broke down outside town once on a Sunday in July. It was 109F, hardly any traffic and the cars that passed me didn’t stop. No cell reception. Just a place I’d rather forget.
Who is someone you would like to meet, and why?
Bono. Just because. No, seriously. U2 started out at a time when the thing to do as a rock band was party, take drugs and basically be crazy. When other bands were on the road to a revolving door at rehab, they were doing Live Aid and all this philanthropic stuff. My dad was their biggest fan, so I guess growing up seeing all the good Bono did for the world was a big influence on me.
Who is someone you would like to avoid, and why?
Politicians as a breed. I’m always being schmoozed by someone wanting my money to back something. Even if I believed in what the politician claimed to be for, I know too much about what actually happens in Congress to believe in the smooth promises they banter about.
If you could time travel to any date, what would it be, and what would you do there?
Early 1776. I’d love to be a fly on the wall of the talks that led to the Declaration of Independence. What did they really hope for? What did they expect to happen, really, when they broke away from England?
I know everybody says they’d go back and change something, but if that were possible, you’d have the ripple effect so the end result you aimed for would be unlikely to happen. You’d end up with a paradox like you never being born, so you never could have gone back to fix things, and all that. Great for books and movies, but not practical in the play out.
What is your birth order?
First and last! I think my parents were afraid to try again.
Tell us about your favorite toy as a child.
My Gameboy! I used to wash the neighbors’ cars to buy more games.
Describe your favorite food and how it's prepared.
Pahole salad, a Hawaiian dish. It’s basically cooked, cooled pahole fern shoots diced and tossed with tomatoes, corm taro, and onion in a soy/red pepper sauce.
Tell us about your best friend.
Leo Keller and I met at UC Berkeley as business majors and shared a place in NYC after graduation. He’s still there, a VP for a major investment company. He’s like the stock whisperer, or something, always knowing a trend before it happens. In karaoke he does a better Trace Adkins than Trace Adkins. He knows where the bodies are buried, so to speak. I’m godfather to his son. We can go months without talking or texting and pick up again like we left off mid-sentence. Can’t ask for a better friend than Leo.

USA Today Bestselling author Ari Thatcher is the naughty side of sweet romance author Aileen Fish. Ari has always loved sexy romance where love takes the leading role. Reviews have called her work “captivating” and “compelling”, and her characters “intelligent, intriguing and realistic.”