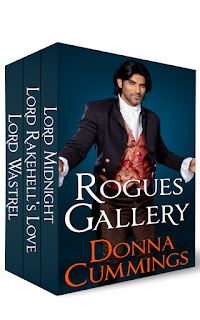 Donna Cummings shares details about the creation of Lord Wastrel in the box set Rogues Gallery.

Title Rogues Gallery
Genre Regency Romance Boxed Set
Author Donna Cummings
Book heat level (based on movie ratings): R
3 rogues, falling in love. . .
Lord Midnight
Lord Midnight, a dashing highwayman, lives for revenge against the uncle who stole his title and tried to kill him as a child. His plan for vengeance--seducing his uncle's bride-to-be--collides with his passion for this spirited young woman desperate to escape her wedding. Soon he must choose: saving the woman who stole his heart, or destroying the man who stole his life.
Lord Rakehell's Love (The Curse of True Love, Book 1)
Simon is late to his own wedding, and Georgiana is heartbroken by the scandal. After such a blunder, how can this rogue known as Lord Rakehell prove his devotion to the woman he loves?
Lord Wastrel (The Curse of True Love, Book 2)
Lord Wastrel--the most notorious rake in London--has a child? Clearly he knows how to sire one, but he knows nothing about raising one. He needs a scandal-free woman to be a suitable mother. So why is he falling for Flighty Felicia, who is notorious for her numerous elopements?

Name: Hugh Longford, Lord Weyson (aka "Lord Wastrel")
Age: 30-ish
Gender: Male
Birthplace: England
Profession: Rogue
Describe his/her body build, skin tone, height and weight. Include any unique features such as dimples, freckles, or scars: Tall. Long-ish dark hair. Able to make ladies swoon with a single devilish smile.
Who is the significant other in your character's life?
That would be Lady Felicia Selby, also known as "Flighty Felicia" since she was notorious for eloping every fortnight. (In her defense, she was trying to fall instantly in love, thanks to her family's curse.) Hugh has known her since they were children, and she was the last person he expected to fall in love with. He resisted mightily. Guess who won that battle?
Tell us about this character, please.
Hugh has earned his nickname by indulging in every bawdy activity available to a young man of wealth and privilege. One morning he comes home from a raucous evening of pleasure to discover he has a daughter he knew nothing about, and he is her only parent. He immediately changes his misspent ways, intent on finding a suitable, non-scandalous wife to help him raise his child.
Are any of his skills a source of pride or embarrassment, and if so, which ones and why?
Hugh was a very successful wastrel, before he became a father, and while he does not regret his past, since it also brought him his daughter, he is not at all receptive to Felicia's suggestion that he write his memoirs.
Does he have children?
Hugh has a high-spirited four-year-old daughter named Lucinda, who is mad about horses, and does her best at every opportunity to convince her Papa she needs a pony of her very own. One of Hugh's biggest challenges is keeping a straight face around his strong-willed child.
Does your character care about what others assume about him?
Hugh doesn't really care what others think of him, but he is desperate to make sure his past sins do not impact his daughter's future or her happiness. She is already disadvantaged socially by being illegitimate, so he does everything he can to prevent her being harmed by that, in any way.
What inner doubt causes your character the most difficulty?
Hugh is worried he will be as dreadful of a parent as his own were. They loved scandal more than him, and he was left orphaned as a result.
What is your character's biggest need at the beginning of the story?
Finding a wife who could be a perfect mother, helping him raise his child. His notion of "perfect mother" does not include a high-spirited woman whose scandals rival his own. . .at least at the beginning of the story.

Why do you think your writer chose to write about you?
She has an insatiable love for the roguish type, especially those of us who make her laugh and fan her face. She's hoping others will feel the same way, which is why she has included three of us in this one volume. *whispers* I am quite convinced I am her favorite, despite her protests otherwise.
What do you wish your writer had not told others about you?
Hmm, I cannot think of anything in particular. Of course, I have become rather adept at using the Delete key on her laptop, even though I swear to her I know nothing of how this "word production device" operates. *winks*
What other character from your book do you think your writer should write a book about, and why?
There has already been quite a bit of clamor for more of the story involving Felicia's Great-Aunt Aurore. Thanks to their family's curse, "Great-Aunt Uproar" has been in love with someone considered unsuitable for several decades. I, personally, would enjoy seeing her cousin Tony's story unfold. The man is an inveterate gambler, and believes he can control his own luck where love is concerned. I have seen a glimpse of the woman who shall change his destiny and, well, I don't want to give Tony too many hints beforehand.
Why do you think your writer loves to write?
I think she finds all of us rather amusing. Well, except for those moments when we seem uncooperative, or another set of characters inserts themselves into the front of the queue when she has planned something else entirely. *glares at best friend Lord Rakehell* He is a perfect example. He wasn't even supposed to have his own story and somehow his got published before mine. Still, we know our writer adores us, no matter what she may publicly proclaim during the actual creation of our stories.
Is there anything you'd like to say to your writer?
Yes, actually. *uses most formal voice* You know how I detest surprises, but you utilized them, quite successfully, to change my mind about many important matters. *bows* You have my sincere gratitude.

I have worked as an attorney, a tasting-room manager at a winery, and the owner of a retail business, but nothing beats the thrill of writing humorously-ever-after romances.
I reside in New England, although I fantasize about spending the rest of my days in a tropical locale, wearing flip flops year-round, or in Regency London, scandalizing the ton.
You can find me on Twitter and Facebook, talking about coffee and writing.