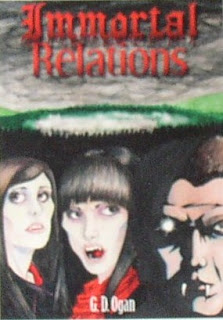 Genre Paranormal
Author G. D. Ogan
Book heat level (based on movie ratings): R
When Gary Logan discovers an old black-and-white photograph of his father in Prague with a woman’s handwriting on the back, he flies there to investigate where his father worked while in Europe, only to meet and fall in love with a beautiful lady who he believes to be a vampire. In love with her, Gary is initiated into her coven of guardian vampires, beginning a journey of epic proportions.

Born in Washington D.C. early in WW-II, mother and child moved to Texas while father went off to war in the Office of Strategic Services (to later become the C.I.A.). After the war, mother and child returned to Arlington, VA to be joined by father now working in Wash. D.C. and on "temporary duty" around the world. Guy was a long-distance runner, which he continued when the family moved to Northern California in the late 50s. He graduated from Los Altos High School, obtained an Associate of Arts from Foothill Junior College and Transferred to Texas Christian University, graduating with a Bachelor of Science degree and a commission in the U.S.A.F. While in Air Force he obtained a Master of Arts at Ball State University’s European Campus. Upon his retirement from the service he completed a Master of Education at Hardin-Simmons University. While in this program he taught undergraduate Psychology, Sociology and Counseling at local colleges as well as writing a book on the assessment and treatment of Attention Deficit Disorder. He was then employed by the Texas Department of Criminal Justice (TX Prison System) to write treatment programs for inmates with addictions and later worked as an Associate Clinical Psychologist performing intakes on prisoners. Guy retired early to care for his disabled mother upon the passing of his father. He, his wife and their three Pomeranians live in West Texas. They have two grown children in other parts of Texas and four grandchildren.