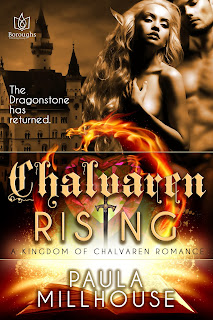 To Ascend Triumphant
Twenty-five years ago, Theo Ansgar abandoned the Kingdom of Chalvaren for a hiding place on another world. Some called him traitor. Some, thief. Now his fully grown daughter Mia must return to the land of her birth…and their war.
It was the elf prince Kort Elias who brought her back. Theirs was an instant connection, an inescapable union of body, soul and sorcery, reminding Mia of what she truly is, and what she must become. There is also Magnus, destined to be more potent than any wyrm Chalvaren has ever seen, a three-day-old dragonlet Mia must nurture and then ride. And then there is the Dragonstone, an artifact of power nonpareil. Joined, they can tip the scales of battle against the wraith-possessed forces of darkness, of Mia’s own embittered kin.
Redemption will be offered, the protected will become the protector, and an ancient prophecy will come to fruition, but only righteous love can conquer all.

Elf Prince Kort Elias, heir apparent to the throne of Chalvaren, Dragon Commander of the fighting dragons of Castle Elias

Name: Kort Elias
Age: 27ish (in human years)
Gender: Alpha Male
Birthplace: Castle Elias in the Kingdom of Chalvaren
Profession: Dragon Commander, rightful heir to the Elias Throne
Ethnicity/Species (if not human): Elf
Describe his/her body build, skin tone, height and weight. Include any unique features such as dimples, freckles, or scars: Kort Elias stands six-foot something, covered with hard muscle. His light skin tone contrasts with colorful tattoos on his shoulders of elven runes heralding his culture’s beliefs in courage, love and strength. His brilliant crystal blue eyes lead up to pointed ears that jut out from his head of long, blonde hair.

Who is the significant other in your character's life?
Mia Ansgar, the love of his life, an elf he brought home to Chalvaren from her hiding place on Earth.

Tell us about this character, please.

How does your hero dress?
Kort wears leather armors, boots, and carries a longbow for dragon training. You’ll find him wearing soft casual trousers and often no shirt for relaxing. And god-forbid, formal royal regalia for his mother’s official castle functions. Yeah, he hates those occasions, but damn he looks good in a suit.
On what special skills does your character rely?
Blessed with magic by his chief deity Varik, Kort uses his royal blue aura to communicate with his dragons. Later he finds using his aura particularly satisfying when he and Mia blend their auras to enhance their love life.
Is he close to family?
Kort’s parents are King Lachlan and Queen Elissabet Elias. He’s the eldest brother of Ian, Quinn, and Brite Elias.
Kort takes his family’s protection and preservation seriously. He not only loves them, he plays with them. Cards with his father in the King’s Library, dragon-wrangling with his younger brothers, and he’s been known to take in secret tea parties with five year old Princess Brite Elias and her imaginary friends.
Does he have children?
Not yet, but he wants to parent with Mia more than anything. Their first charge is the dragonlet Magnus whom they nurture together in Chalvaren Rising – kind of like a new couple takes in a puppy to raise.
Is your character involved in his community?
Kort is tied to his community at Castle Elias in an intimate way. His skills as Dragon Commander, his affinity for teaching dragons and elves to work together to protect their home builds important relationships with everyone in the castle. But, incorporating Mia into castle life proves one of Kort’s biggest challenges. She’s related to Chalvaren’s public enemy number one – Isa Ansgar – a dragon killer.
What inner doubt causes your character the most difficulty?
The inner doubt Kort won’t be able to stop Isa Ansgar from killing Chalvaren’s dragons and taking over Castle Elias, or that Mia might join Isa’s forces of dark magic.
Not only does Mia control the Dragonstone, an elven artifact of power nonpareil, the only Sprit dragon know to the realm has imprinted on Mia, and if Isa gets her hands on Magnus and Mia, Chalvaren could be doomed.
What is your hero's biggest hopes and dreams?
Kort’s biggest hope, his dearest dream is that Mia will marry him and together they’ll build a future dynasty in Chalvaren. He wants to nurture Magnus (the dragonlet) into his role as dragon ambassador so he can reunite all the dragon of Chalvaren. After all, the castle with the most dragons wins, right?
If your character could make any one thing happen, what would it be?
Kill Isa Ansgar himself.
What is your hero's breaking point?
When he sees Mia sitting at Isa Ansgar’s side – it’s the darkest moment for him in Chalvaren Rising.
How emotionally expressive is your character to others?
He yells. A lot. Training elves to ride dragons demands it, but he’s finding out his headstrong ways don’t work in every relationship. Mia’s set him straight on that point more than once.

BONUS:
Paula: Kort – is it true the dragon Garnet the Red has the power of speech but never talked to you before Mia showed up in Chalvaren? And if so, why?
Kort: Umm, yeah. It’s true. It would have been great to talk to him all those years, Paula and Kayelle, but I think he held silent until Mia showed up because she reminds him of her father, Theo Ansgar. Garnet was Theo’s dragon, see. Honestly, I think the beast was so sad Theo abandoned him he couldn’t find his voice until I brought Mia back to Chalvaren.
Paula: Why are you so hell-bent on stopping Isa Ansgar?
Kort: She kills dragons. She kidnaps and possesses Chalvaren’s elves with black magic and turns them into hideous creatures known as Shadow Elves. Any threat to my family like that, to my people and my dragons, will not be tolerated. If Isa wants her war I’ll be first in line on the battlefield.

Why do you think your writer chose to write about you?
Thanks for asking, Kayelle. Paula chose to write about me because I’m the only character who could tell this story, well, me and Mia, that is. I showed up for work one day and bothered her until she had no other choice but to tell Readers about Chalvaren Rising.
What do you wish your writer had not told others about you?
I’m not fond of the fact she divulged my fears – of losing Mia, of how embarrassed I was when Magnus couldn’t land, or roar. Of how badly I wanted to be the one to silence Isa Ansgar – but couldn’t do that alone. I’m the king’s son, right - people aren’t supposed to know all that internal conflict garbage about heroes, right?
What other character from your book do you think your writer should write a book about, and why?
Any of the other wizards in Chalvaren, but Lucan Brix fascinates me. My uncle’s command over magic helped me get Magnus back to Chalvaren – and to find Mia. What Lucan went through in Chalvaren Rising was hard as hell.
Why do you think your writer loves to write?
I think she’s this amazing human who’s got the Universal Story inside her soul. She understands the value of entertainment to society. She likes to see the good guys win, and she’s all about the Happily Ever After even if she makes it hard as hell to get there.
Is there anything you'd like to say to your writer?
I’m damn glad you took the time to tell our story, Paula. The fact that you understand how I believe Love Is Worth Fighting For means everything to me. Mia, and Magnus, and hell, the whole Kingdom of Chalvaren are all better off because you wrote our story down, and found our perfect editor. Thank you. The Kingdom’s portal is always open for you and your friends to come and visit. That includes you too, Kayelle, and all your readers.

Paula Millhouse is the writer of books where fantasy, romance, and suspense collide, including Chalvaren Rising, its prequel, Dragonstone, and Three Wishes. Dragonstone also appears in the anthology, A Gift of Fantasy. These stories are published by Boroughs Publishing Group.
“I wanted to find out what would happen if I designed a world where fantasy lovers get their adventure quest, but also gave their girlfriends a healthy dose of grown-up romance along the way. How can we blend High Fantasy and Romance into a story that leaves the Reader breathless, where magic and suspense collide in a spellbinding imaginary world?”
When not following her muse on quests for happily ever afters, Paula works in the field of medicine as a Family Nurse Practitioner by day, and micro-gardens in her potager with her husband and their pack and pride of furry babies. Born and raised in Savannah, Georgia, where Spanish moss whispers tales in breezes from the Atlantic Ocean, as a child Paula soaked in the sunshine and heritage of cobblestones, pirate lore, and stories steeped in savory mysteries of the south.
She’s a PRO member of Romance Writers of America, and the Fantasy, Futuristic, & Paranormal Writers specialty chapter. She lives in the mountains now, but she honors her southern heritage as a storyteller by sharing her adventures in fiction with readers.