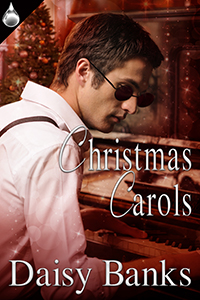 Christmas Carols by Daisy Banks…One man's courage and one widow's beautiful voice lead an unlikely pair on a tender journey toward happiness.
Virtue's Lady, The Southwark Saga Book 2 by Jessica Cale…From toiling for pennies to bare-knuckle boxing, a Lady is prepared for every eventuality.
False Impressions, McKay-Tucker Men Book 3 by Marianne Rice…Samantha Chase is happy to have found a place to start a new life with her son, the last thing she expected was to fall in love with her new boss.
A Christmas Together, Safe Harbor Book 2 by Tara Quan…The Christmas season is stressful enough for Brennan without a botched kidnapping and the arrival of her estranged husband to "save the day."
Just a Holiday Fling, Pine Lake Book 1 by Tiffany Marie…How can two people with such different wishes both get what they want for Christmas?
Playing the Part, Love Around the Corner Book 3 by Lynn Rae…Thomas Locke catches her eye. Thomas is hoping to take his career in a new direction, the last thing he needs is to fall for the curvy driver who jump-starts his heart.
Come Yell or High Water by Elise Alden…Cara Drayton figures getting stuck on remote Yell Island with sexy, aggravating Max Kempton is just about the worst thing that could happen to her. Or is it?
Naughty and Nice by Robin Danner, Pepper Espinoza, and Lisa Marie…3 Christmas stories just in time to get you in the holiday mood.

A Holiday Memory Christmas in a Middle Eastern Desert 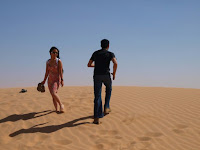 I must start this post with a disclaimer: while the heroine in my holiday romance A Christmas Together also spends December 25th in a Middle Eastern desert, her story is in no way, shape, or form inspired by true events. My own Christmas in the UAE was decidedly less eventful than Brennan's. (If I remember correctly, she might have gotten kidnapped by terrorists, and then rescued by a hunky Air Force major.)
Since my significant other (who is NOT an Air Force major...) only has one brother in the US, he tends to volunteer to hold down the fort during the holiday season, when most of his colleagues make plans to spend a week or two at home. Thus was the case in December 2011, while we were posted in the sleepy capital city of Abu Dhabi. In keeping with the culture of oil-money extravagance, various restaurants were offering "Traditional Christmas Dinner: With Ham and Turkey"—at the cringe-worthy price of a couple hundred dollars a head. Despite the promise of free-flowing champagne, we decided to save our pennies and eat in (although we did splurge on some actual sausage from the "pork room" at the local supermarket).
For the most part, everyone we knew had left the city. Most of our neighbors had also jetted off a week before, so our quiet little development was even quieter than usual. It was hot, humid, with zero chances of snow (or even rain), and since theatrical releases overseas trail a few months behind the US, we didn't even have the option of going out for a holiday movie. In short, we were pretty much on track to have one of the least Christmas-y Christmases in memory.
As we were arguing over Netflix options, however, a knock sounded. We opened the door to find five carolers, led by a man in a Santa costume. Flummoxed, we watched as Santa strummed his acoustic guitar, prompting his troupe to commence synchronized dancing, while singing a particularly "Pop" rendition of We Wish You A Merry Christmas.
They made our night, and we were too stunned to even say a proper thank you. 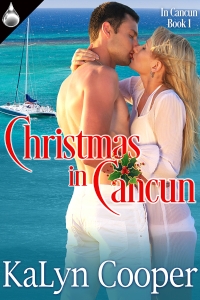 Christmas In Cancun, In Cancun Book 1 by KaLyn Cooper…A sexy former SEAL and beautiful Mayan anthropologist find more than they bargain for when they team up to complete a decades old family treasure hunt in Cancun.
All He Wants For Christmas by Trista Ann Michaels…Trapped in a mountain cabin over the holiday, sparks will fly and passion flare as Kaycee and Mike learn to leave the past behind.
The Sanctuary, Eros' Edge by Arika Stone…Eve Lauren is seeking solace from the pain of a broken heart with a vacation in Finland.
A Clockwork Christmas, The Blackwell Legacy Book 1 by Nina S. Gooden…Sorcery, danger, and a mysterious stranger will make this Christmas one Olyve Blackwell will never forget.
Perfectly Imperfect Mine, Garrison Brothers Book 1 by Amelia Shea…Instant attraction, explosive chemistry, and a dark secret that could destroy them … falling in love has never been so dangerous!
Sins of Long Ago, Nocturne Book 2 by Naomi Bellina…When danger brings them together, they find that desire demands satisfaction.
False Start, McKay-Tucker Men Book 1 by Marianne Rice…She discovers the sports-loving alpha male is much more than a sexy package wrapped in great biceps and a tight rear end.
Long Gone Cat by Katherine L. Evans…Secrets, lies, devastating loss, and old wounds ... insurmountable odds?
Better Not Cry by H.A. Fowler…Jenna's holiday plans take a startling turn when she finds herself in the company of a hot, sexy faerie whose only desire is to fulfill her wildest fantasies.

A Holiday Memory Christmas in Japan

by KaLyn Cooper; (kind of goes with my Christmas in Cancun theme) 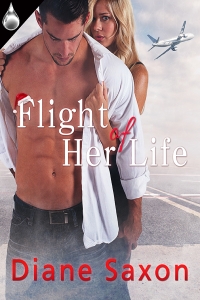 Nothing is ever easy when you are a military family, and holidays are often the most difficult, but one year our Christmas plans paid off in an unexpected way.
A month before we were to move half way around the world to live for three years in Japan—after I'd quit my job, we'd sold the house and were living in temporary base quarters—Macho Marine announced that his orders had been changed. It wasn't the first time the Marine Corps had done that to us, but this time it threw us for a major loop. His new orders were for a one-year tour…unaccompanied!
If military life teaches you anything, it's to be prepared. Knowing we were going to be gone for three years, we'd saved for a Christmas trip home half-way through his tour of duty. We used that money for the round trip plane tickets to Japan for Favorite (only) Daughter and me. Since the two of us weren't supposed to be there, we all lived off base in an extremely small apartment, but it was our home for that unique year abroad.
Interestingly, only one percent of Japanese are Christians, although Okinawa has about fifty-thousand Americans living on and around the military bases. So as the holidays approached, little changed. Unlike in the States, Japanese stores were not loaded with green and red. No holly or pine adorned street windows, and you couldn't find festive clothing decorated with silly Santas or reindeer. Speakers blared no traditional holiday music and life continued without the overzealous holiday hype.
Unless you were on base, it didn't look like Christmas. Hour-long lines at Pack 'n Wrap and the post office were the best indication the holiday approached. The women's section at the Exchange, the base department store, was normally filled with perfume, jewelry and lingerie but had been stripped bare after payday in mid-November.
Our friends living in base housing on accompanied tours, decked their homes in the treasured family ornaments brought with them. We used the construction paper ornaments our daughter made at the base day care she attended a few hours every week. We attempted to keep our family traditions but selecting a tree together ended in a toddler tantrum when her father had near heart failure over the outrageous price for a pine tree resembling Charlie Brown's.
On Christmas morning, the gifts that had been sent over 7,500 miles appeared under the tree beside the ones bought for each other. We videoed Favorite Daughter opening each and every present so the grandparents could belatedly see her joy. As noon rolled around, so did about a dozen other Marine officers who missed home as much as we did. Steaks on the grill replaced the usual turkey or ham since our tiny apartment didn't have an oven.
As the men played with Favorite Daughter, missing their own children, I thanked God for the money we'd saved for that Christmas trip home. It allowed us to be together for the entire year and share our family on Christmas day with other Marines who couldn't be with theirs.
This holiday season, please remember the 225,000 Marines, soldiers and sailors deployed overseas who cannot be with their families for Christmas.
Flight of Her Life by Diane Saxon…Accident-prone Bailey must negotiate her way through a snowbound airport, a cancelled flight, and a blackout to get to her own engagement party.
Ghost of Christmas Past, PSI Corps Book 1 by Xakara…In a snow-bound cabin, they must face the truth of the past, the secrets of the present, and the hope of the future.
Disenchanted Christmas by Sandra Sookoo…She'll just have to take a chance and hope the holiday spirit and the power of love will be the miracle she needs.
A Called to Mate Christmas, Pack Mates Book 2.5 by Lynn Tyler…Quinn's thrilled Declan's being so romantic during the Christmas season and he's determined to do something just as awesome for his mate.
Dawn's Early Light, PSI Corps Book 2 by Xakara…The peace and tranquility of the group is threatened when secret desires are revealed by dawn's early light.
Lucky Enough, Whisper Hollow Book 1 by Kelli Evans…Reed's past won't stay in the past, but add a smart-mouthed teenager and a sexy, hot court appointed mentor, and he'll need more than luck to find his happily ever after.
Believe by Megan Slayer…Long distance relationships are never easy, especially at Christmas time.
Cleopatra's Dagger by MacKenzie Reed and Rae Monet...The jeweled dagger of Cleopatra and the planet Earth during the busy Christmas season... ho ho oh no!
The Zebra Wore Red Stockings by Pepper Espinoza...It's their first Christmas together, and she wants everything to be perfect—the sort of special holiday she never had before.

A Holiday Memory A Christmas Memory

by Rosanna Leo
I'm pleased to be able to share my Christmas memory with you, and I must admit, this was not an easy assignment for me. For one thing, I've been fortunate enough to have many wonderful Christmases and it's hard to pinpoint particular moments. The other reason this is a tough piece to write is because we lost my mother-in-law to cancer last year and this will be the first holiday season without her. My mother-in-law Gail was a force of nature. She usually hosted the rest of us and we all used to admire her Martha Stewart-like decorating abilities. Seriously, the woman could do wonders with a sprig of holly, a few boughs and strategically-placed candy canes.
One thing Gail always enjoyed at the holidays was games. She usually devised a few, making us compete for prizes. There was always a "mystery present," one that was invariably passed around while a timer counted seconds. We were encouraged to "steal" the gift from each other. When the timer buzzed, whoever held the gift won it. Because of Gail's enthusiasm, we had a lot of raucous parties.
This year, we won't have Gail with us and it's bound to be our most poignant Christmas ever.
However, we have made sure to keep her spirit alive. We've included some of her tried-and-true recipes in our menu (she loved a cherry jelly ring). We'll likely play some of her favorite music (Neil Diamond and Barbra Streisand). And the gift stealing game has been set in motion.
Will it be hard? Indeed, but we'll make the best of it. After all, if she were with us, I know what she'd say.
"Stop your moping and refill my wine glass. And don't be cheap with the red."
I'll be raising a glass of Merlot in her honor.

Happy Holidays to all from Liquid Silver Books!