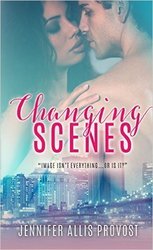 Title Changing Scenes
Genre Contemporary Romance
Author Jennifer Allis Provost
Book heat level (based on movie ratings): R
“Image isn’t everything
…or is it?”
For Astrid Janvier, image is everything…
Astrid is a world-renowned model, as famous for her strut as her startling green eyes. She’s modeled for the biggest names in the fashion world, and is regularly invited to parties in New York, London, and Paris. Thanks to a designer label addiction, she’s also broke, and takes a job as a cocktail waitress just to make rent. When her best friend Britt asks her to be her maid of honor at her upcoming wedding, their first task is to decide the menu.
Donnie Coehlo is a young, up-and-coming chef with a dinner menu to plan…
Donato—Donnie for short—is the head chef at Thirty-Nine and Twelve, a seafood bistro on the Connecticut shore. It’s a great accomplishment given his youthful age, but Donnie doesn’t brag. He just wants to find the right girl, settle down, and have a bunch of kids. When Astrid arrives at his restaurant, Donnie hopes she is the one. But would a high-priced model like Astrid be interested in a regular guy like him?
As Astrid’s life crumbles around her, and Donnie makes a terrible choice, Astrid learns the two of them are irrevocably tied together.
Will their connection be enough for Astrid to leave her high-fashion life behind, and accept what Donnie has to offer? Or will she chase her dreams as a model, leaving Donnie as part of her past?

Jennifer Allis Provost writes books about faeries, orcs and elves. Zombies too. She grew up in the wilds of Western Massachusetts and had read every book in the local library by age twelve. (It was a small library). An early love of mythology and folklore led to her epic fantasy series, The Chronicles of Parthalan, and her day job as a cubicle monkey helped shape her urban fantasy, Copper Girl. Heir to the Sun, book one of the Chronicles of Parthalan, launched June 1, 2015. Changing Teams, the first in a new contemporary series, released November 10, 2015 from Limitless Publishing. The second book, Changing Scenes, will release January 5, 2015.