Stressing the Hero from Stealing Hope a #ParanormalRomance by @FatedDragons #RLFblog 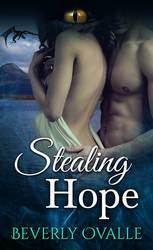 Beverly Ovalle dabbled with writing on and off for years when her best friend finally dared her to submit a story to a writing contest. Beverly decided she had nothing to lose and since she’d always wanted to be an author sent it in and agonized for months waiting to hear back. Contract in hand she has never looked back.
Beverly has been obsessed with dragons and romance since she was a young girl, collecting dragon books and reading everything she could find on them even down to the care of real life dragons. She’s always been slightly panicked that the world as we know it will end, so has prepped for it, haunting survivalist pages and prepper projects she felt she needed in the event SHTF.
An avid fan of all romance, Beverly’s goal is to share her love of the written word and write the hot and erotic romances that she enjoys. She writes what she loves to read and it was only a matter of time before her obsessions crept into her writing for her to share. She hopes you enjoy her tales as much as she loves writing them.
A Navy Veteran, Beverly has traveled around the world and the United States enabling her to bring her settings to life, meeting and marrying her husband of twenty five years along the way for her own romance. Reading romances since the fourth grade she’s followed as the genre changed and spread into the vast cornucopia of romance offered today.

This hero is at a party. Considering his story, describe the party.
This would definitely be a hunting party. Survival is the main goal.
How does the hero feel about being this particular party, and what body language is he displaying that gives it away?
Ari is a bit impatient having to hunt as a human. If he was to go as his dragon, he’d be done and back in a quarter of the time. He checks over the weapons he is using, perhaps a bit more diligently than the men around him.
Is he more likely to mingle or remain aloof?
Ari would remain aloof, if he can manage it he’ll change to make hunting easier as long as he wouldn’t be found out. He has no desire to become hunted.
If he drinks, what is his drink of choice at this party?
Water is his drink of choice at the hunting party.
How much drink is his usual?
Ari will have a drink with his meal. Dragons don’t really indulge in anything that could expose them to humans.
The hero figures out where the hiding places are and then goes there. Is it to hide, to avoid someone, or to go drag a friend back to the party?
Ari will go there to indulge his curiosity to see if anything is hidden there, and to scope out the territory.
Is he likely to latch onto a friend and stay with him/her and ignore others, or is he the friend that others latch onto?
Ari draws others to him.
If someone picked a fight at this party, how is the hero going to handle it?
Ari would step in to stop it.
Is the hero the one most likely to get tossed out of the party, or the one who does the tossing?
Ari would be the one doing the tossing.
Will he know when to leave, or stay late and make a nuisance of himself?
Ari will stay until the goal of the party is done.

How does the hero handle it if the cops or some other authority figure pulls him aside when he was blameless in a situation?
Ari would grit his teeth and listen then try to explain.
How does the hero react to hearing a scream?
Ari runs toward it.
If he sees someone being assaulted, what is the FIRST thing that crosses his mind?
That he has to stop it.
If he sees someone being assaulted, what is the FIRST thing he does?
Ari steps in to stop it.
This hero attempts to rescue someone and realizes that he is in over his head. The odds are against him and there is no way out. He is going to get his butt handed to him. What does he do?
Ari does what he thinks is right, even if he gets his butt kicked.
The hero runs into the one person from his past he wanted to avoid. He can't get out of the situation and must interact with him/her in some way. What does he do?
Ari keeps the contact to a minimum to accomplish what must be done.
Someone younger than the hero is in charge of the situation, and they are handling it badly, perhaps bungling things. How does the hero deal with it?
Ari will try to assist him or her, doing his best to correct it. He will step in to correct it if he has no choice and only if someone will be hurt.
The hero is in physical pain but must bear up under it and keep going. What does he tell himself in order to get through the situation?
He’s a dragon, he can do anything.
What mentor's words come to mind in a bad situation?
Give it time, it will pass.
What lesson from his past gets him through a stressful situation?
The knowledge that no matter what, he has his family to stand behind him.