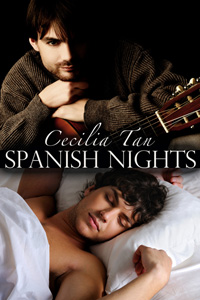 Today's featured book is Spanish Nights  by Cecilia Tan.
About the Book
Title: Spanish Nights
Genre: Gay Romance
Author: Cecilia Tan
Book heat level (based on movie ratings): R
Two men, a chance meeting, a torrid affair.
One an internationally known rock star, the other from the streets of Spain: they meet in an erotic tale as hot as a summer night in Seville, as seductive as red wine and song.
Daron didn’t expect to find a lover that day at the airport. He didn’t expect to suddenly change his plans and fly to Spain. But sometimes opportunity knocks and you have to grab Fate by the lapels and kiss until you’re breathless.
Orlando is as mysterious as he is beautiful, doe-eyed and nimble-fingered. To Daron, his presence seems to beckon something from deep within. When the two guitarists meet, they jam together to pass the time, but music sparks a deeper desire to connect, to touch, to love. But when Daron arrives in Spain he finds Orlando entangled in something more than simply sweaty sheets…
This Spanish Nights ebook also contains the complete erotic story “Home Sweet Home” as a bonus.
Buy This Book
Amazon: http://amzn.com/B01BEQ14QC
About the Author

Cecilia Tan is an award-winning author of passionate fiction. RT Book Reviews awarded her Career Achievement in Erotic Romance in 2015 and her novel Slow Surrender (Hachette/Forever, 2013) won the RT Reviewers Choice Award and the Maggie Award for Excellence from GRW in 2013. She has been publishing Daron's Guitar Chronicles as a web serial since 2009 and her Secrets of a Rock Star series (Taking the Lead, Wild Licks) is published by Hachette/Forever. In 2017 Tor Books will begin publishing her paranormal series, The Vanished Chronicles. In her spare time, Cecilia is the editor of the Baseball Research Journal and publications director for SABR, the Society for American Baseball Research.
Author Social Media
Website: http://daron.ceciliatan.com
Blog: http://blog.ceciliatan.com
twitter: https://twitter.com/ceciliatan
Facebook page: https://www.facebook.com/thececiliatan
Pinterest: https://www.pinterest.com/ctanwriter/
Goodreads https://www.goodreads.com/author/show/65430.Cecilia_Tan
Amazon Author Page http://www.amazon.com/Cecilia-Tan/e/B001HMRWLK
Posted by Nicole Morgan at 7:00 AM