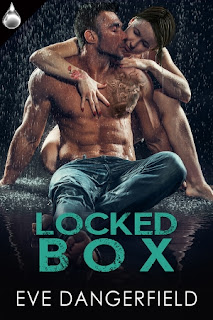 Eve Dangerfield has loved romance novels since she first started swiping her grandmother’s paperbacks at the age of fourteen. Now she writes her own unapologetically sexy tales about complex women and gorgeous-but-slightly-tortured men. Eve currently lives in Melbourne with her lovely sister and a rabbit named Billy. Locked Box is her second novel.

Title Locked Box
Genre Contemporary Romance
Book heat level (based on movie ratings G, PG, PG13, R): R
Julia Bennett isn’t having a great day. Funding for her video game is running low, her IT job is sucking her dry and to cap it all off she’s locked in a police station with the very handsome, extremely married guy she’s been avoiding at all costs. Max Connor isn’t having a great year. He’s getting divorced, his best friend is squatting in his spare room and his inappropriate crush on the IT girl is getting dangerously out of hand. And that was before he locked the two of them in an evidence room for the weekend. Surrounded by three decade’s worth of drugs, guns and floppy disks, Max and Julia are forced to confront the heat that lies between them with dangerous, funny and occasionally toe-curlingly sexy results.

Welcome to Romance Lives Forever! We're happy to have you here today.
Name: Julia Bennett
Age: 24
Gender: Female
Birthplace: Brenthill, Victoria, Australia
Profession: IT woman and game designer
Describe your body and build, skin tone, height and weight. Include any unique features such as dimples, freckles, or scars.
I’m super tall with light brown hair, hazel eyes and freckles. I burn very easily in the sun and can get away with not wearing a bra, which I do almost all the time because... Why wouldn’t I.
Who is the significant other in your life?
Max Connor, I’ve been crushed out on the guy for years which was particularly painful when he was married.
Please tell us a little about yourself.
I’m a white trash girl who grew up in rural Australia. When I was a kid all I ever did was eat cheese toasties and play video games so it made sense that I tried to go into professional gaming. I didn’t have a lot of success; gaming is expensive and I’m a woman but my best friend and I are working on our own first person shooter game Scarlet Woman. I’m not great with people, especially guys, especially guys called Max Connor
What kinds of things do you always carry (in pockets or purse)?
Mints (for unexpected kissing) Condoms (for when things progress further), two USB storage devices, an external hard drive, lip balm and a bunch of unwrapped cough lollies that have merged into a superball of grossness.
Are you involved in your community?
I’m involved in my community in the sense that my sister and I adopt dozens of stray dogs and let them clog up our house and garden. This annoys a lot of our neighbors but if they complain we go around to their house with a couple of the saddest looking dogs and tell them to take them to the pound if they hate dogs so much.
How do others perceive you based upon looks, and is this assumption accurate? In the IT industry and the gaming world being a woman is a huge setback. You might think being young and I guess conventionally attractive would be helpful but it really isn’t. People think you’re stupid, that you slept you way to a job or that you don’t know what you’re doing. They also expect you to be nice which is bull. I’m an amazing coder but I’m shy and not really that nice, unless you’re already my mate or you bring me coffee.
Can you keep a secret? Why or why not?
I’m an IT person, I know so much dirt about so many people it is unhinged. Basically nothing surprises me anymore. On that note I’m good at keeping secrets, mostly by stuffing them down and pretending they don’t exist because I don’t want to be thinking about your google history when I pass you in the hallway.
How do you handle challenges?
By curling up under my duvet and eating toasted cheese sandwiches until someone else makes me take responsibility for my life. I know that sounds bad but I have confrontation issues. Unless by challenges you mean ‘gaming related challenges’ in that case I drink a shit-tonne of Red Bull and I go to war.
How emotionally expressive are you to others?
I express my emotions mostly through grunting and fixing/breaking your electronic devices. Emotions are not my strong suit. I probably shouldn’t be telling you this but I’m extremely susceptible to guilt trips. I’ll give you my kidneys if you make me feel guilty enough.
What would you like to tell your writer?
Cheers for making me look semi-cool but you really went into a lot of detail with the sex stuff didn’t you? I mean I don’t care but Max is going to be super embarrassed when he finds out. He hasn’t gotten over his whole ‘fine upstanding gentlemen don’t spank people’ thing. Also please write a sequel about my sister. Ash’s story needs to be told. To take the spotlight off me.