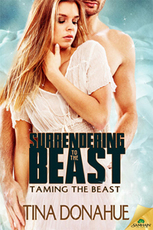 Today's featured book is Surrendering to the Beast by Tina Donahue.

Title Surrendering to the Beast
Genre Erotic Paranormal-Romantic Comedy
Author Tina Donahue
Book heat level (based on movie ratings): R
When she's good, she's very good. But when he's bad, she's better.
Taming the Beast, Book 2
As a good fairy, Heather is empathetic and chaste to a fault. No bad language, no dirty thoughts, flirting and no sex. But when a satyr named Daemon steps up to her reception desk at From Crud to Stud, she finds herself on the fast track to exquisite corruption.
Daemon is the total bad-boy package with a kiss straight from the dark side. Though he's here for a supernatural makeover, Heather can't imagine why any red-blooded woman would want him to change.
A disciple of the god of wine, Daemon has had his share of good times. But sex has never been this good. Heather brings out a new side of him, a side that makes him want to protect as well as pillage.
But Daemon needs a little creative backup to help set his fairy's naughtiness free. And that means bringing in Mistress Jin. Under the genie's tutelage and Daemon's shameless lust, Heather is about to learn what it means to let loose.
Warning: Not your typical bedtime story. May lead to indecent behavior, a taste for voyeurism, discipline, bondage, m/f, m/f/f and f/f action, which will result in screaming orgasms. Proceed with caution.