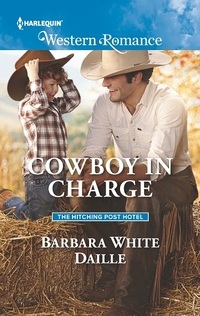 Title  Cowboy in Charge
Genre  Contemporary romance
Author  Barbara White Daille
Book heat level (based on movie ratings G, PG, PG13, R): PG
TIMING IS EVERYTHING
Single mom Layne Slater thought she'd seen the last of Jason McAndry when he chose the rodeo over her and their unborn son. Now Jason's back in Cowboy Creek and just as handsome as ever. But Layne can't give in to those feelings again. She has to protect her children…and her heart.
Jason wants to try to make up for the pain he caused when he left. The least he can do is help Layne while he's home. Before long, Jason realizes he's finally ready to be the husband, father and man his family deserves. But can Jason prove to Layne that this time, their love is forever?

Barbara White Daille lives with her husband in the sunny Southwest. Though they love the warm winters and the lizards in their front yard, they haven’t gotten used to the scorpions in the bathroom. Other than that, she is thrilled to be living the writer’s life and coming up with stories to share with you!
The first of her Flagman’s Folly stories, A Rancher’s Pride, is now available in Larger Print exclusively from Harlequin. You can also find the original version at most major e-tailers, including Harlequin and Amazon.
The next book in Barbara’s popular The Hitching Post Hotel series is Cowboy in Charge, July 2016, with other books in the series to follow. In November 2016, she begins a new sweet romance series for Entangled Bliss.
She would love to have you stop by her website and blog, and look for her the next time you’re on Facebook and Twitter.