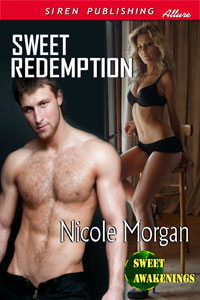 Title: Sweet Redemption (Sweet Awakenings 1)
Genre: Erotic Suspense Contemporary
Author: Nicole Morgan
Book heat level: R
Tamara is in an unsatisfying relationship with her boyfriend, Brent. She is shocked when she learns he has been unfaithful. Seething with the betrayal, Tamara throws herself into a night of passion with the sexy owner of the health club she attends.
Jack, a former Navy SEAL and current health club owner, is wrestling with demons from his past. A former SEAL mission that went horribly wrong has left him struggling with issues of betrayal.
Brent is prepared to do whatever it takes to get Tamara back. His desire for her becomes an obsession that he cannot control. He sets out to destroy anyone that stands in his way. Will Brent succeed? Or will the power of Jack and Tamara’s love give them the courage to fight against an unrelenting evil?