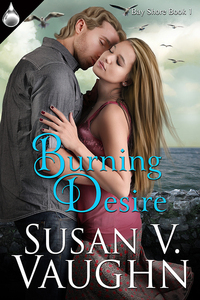 Romance Author, Susan Vaughn understood the meaning of sarcasm before she could walk.  Her childhood in the suburbs of Detroit was spent mainly trying to outwit her six creative siblings.  When she wasn’t working on the next soul crushing jab, she sharpened her imagination on romantic literature and day dreamed about her knight in shining armor.
It didn’t take long for this hairdresser by trade to turn her passion for reading romances into writing her own unique love stories.  Susan lives her life finding laughter in all situations, and delights in marrying sarcasm with romance to create realistic falling-in-love stories in the unlikeliest of scenarios.
Susan lives on the shores of Lake Huron with her real life knight in shining armor and enjoys watching their three children learn the art of sarcasm and wit.

Title Burning Desire
Genre Contemporary Romance
Author Susan V. Vaughn
Book heat level (based on movie ratings G, PG, PG13, R): R
A steamy night not forgotten…
One night of passion with a handsome stranger compels Louise Piekartz to change her path. Instead of finishing law school at her parents’ urging, she chases her dream to Bay Shore and revives her grandmother’s bakery. Now that she has secured a life of her own, she won’t let anything get in her way. But can she resist the temptation of the man from her past, when he shows up to rekindle their love affair?
Ever since his father’s death, Isaac Rybak has a burning need to fix everything around him. But his mother’s addiction to drugs is not something he can cure. Consumed by his inability to stop his mother from using, he struggles with his inner demons—until the woman of his dreams walks back into his life, and all his efforts are focused on a battle he knows he can win: securing her heart. 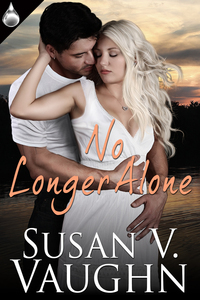 Title No Longer Alone
Genre Romantic Suspense
Author Susan V. Vaughn
Book heat level (based on movie ratings G, PG, PG13, R): R
Ex-football star Erik Bonay has never met a challenge he couldn’t conquer—until his sister’s unexpected death leaves him with her four-year-old son to raise alone. Now for the first time in his life, Erik is forced to ask for help. And the woman who rises to his need just might be too dangerously enticing to ignore.
Nora Francis has been on the run from her demented ex-boyfriend for almost two years. Then her luck begins to change when she accepts a nanny position in Northern Michigan that offers her a chance to hide out. Too bad her new employer has her heart feeling anything but safe.
Nora just met the man of her dreams, but can she allow him to become part of her nightmare? No Longer Alone is a heart-wrenching romantic suspense story that follows one woman’s fear, and one man’s need to protect.