Welcome to my world of romance where fantasy becomes reality if only for a moment in time. 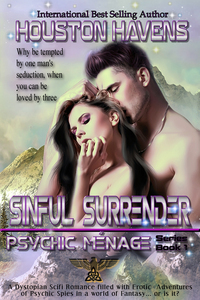 Title Sinful Surrender (Psychic Menage #1)
Genre Erotic Dystopian Romance
Author Houston Havens
Book heat level (based on movie ratings): R
Why be tempted by one man's seduction when you can be loved by three?
Top psychic spy Fay Avalon saw too much on her latest mind traveling mission and is now on the run from her post-catastrophic dystopian government, searching for the truth and proof. She escapes but is shot down, landing in the arms of the enemy.
In Drakker and Arlo’s world, women are so rare the men have accepted a polyandrous lifestyle. When the brothers stumble upon Fay unconscious in the wreckage of an aircraft, they are immediately attracted to her. Arlo wants to keep her, but Drakker knows they can’t. They must take her to their brother Logan Abán, leader of their people.
Logan struggles with trusting anyone, even himself. When a beautiful, intelligent, and intriguing woman falls into their laps, his denied desires for intimacy challenge his need to trust the spy. He’s frustrated by romantic Arlo’s claims of her innocence. Even when pragmatic and dominating Drakker defends her as well, Logan refuses to trust his gut.
Can one woman satisfy the diverse desires of three men? Will Logan’s fears be realized by betrayal? Is Fay to be sentenced to death as a spy, suffer a fate worse than death by being returned to her government as a traitor, or will she find a new life and love as the wife of three sexy brothers? 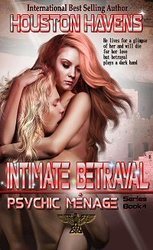 Kindise Wyatt escapes her Star Rider captor and returns to Earth. With the help of a sexy Old World Mole and his mysterious friend, she's determined to uncover the whereabouts of her lover. Instead, she finds nothing but betrayal and her captor in pursuit.
On the lam after betraying his evil ruler, ex-Dirt Dweller and drifter Jaden Valenti confirms his name is on a hit list. Finding what he believes will be safety amongst the Airbornes, he recreates himself and hides his past until trouble walks back into his life in the name of Kindise Wyatt, the woman he was ordered to assassinate and didn't.
Due to the obsessions of a Fae woman Sori gave up his hard-earned royal title and left his homeland of Elfame. Love is the furthest thing from his mind until he is sent in Jaden's place to pick-up some cargo...human cargo in the form Kindise Wyatt. He feels the Fae magnetism of his soulmate in her. Problem is; she's in love with someone else.
Will Jaden fulfill his orders to kill Kindise and get his name removed from the list, or will his secret be exposed and betray the friendship he has with Sori? Does Sori help Kindise find her lover, or will a love between them have a chance to flourish before a fatal attraction and a determined captor rip their love asunder? Will Kindise find true love or will betrayals at every turn crush the fight out of her? Can she find her inner strengths to keep fighting and lead The Freedom Fighters to defeat the Dirt Dweller elites, once and for all?