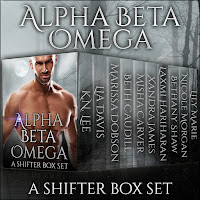 Title: Night Falls by Nicole Morgan (Alpha Beta Omega Boxed Set)
Genre: Erotic Paranormal Romance
Author: Nicole Morgan
Book heat level: R
Paul Holton is the leader of the Racinitine Pack. Rising to his position from bloodline and destiny hadn’t been easy for the strong willed young man. Having sacrificed many of the things his kind long for in their reticent existence, Paul knew all he forfeited had been for the greater good.
Kinzey Sloane had been finding ways to get herself into trouble ever since she was a rambunctious young child. Now a reporter for the small press, The Golden Gazette, she was determined to make a name for herself no matter what it costs.
When Paul crosses paths with the tenacious and gorgeous red head, Kinzey he knows he’s in trouble. Not only can he see the fire in her, but he can feel it as well. But when Kinzey gets too close to his secrets, he is faced with making a choice that could not only change his world, but the only life his pack has ever known.