Today's featured book is Dominated by the Dragon by Kryssie Fortune

Variations on a Dragon Myth 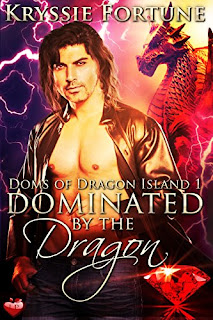 When is a dragon not a dragon? When it’s a chimera of course. A what?  Well, to quote Homer’s Iliad a chimera is thing of immortal make, not human, lion-fronted and snake behind, a goat in the middle, and snorting out the breath of a terrible flame of bright fire. That sounds like the world’s worst description of a dragon to me. No way would I want to meet this beast, especially if it breathed fire.
The Ancient Greeks had a hero for everything, even slaying a Chimera. Perseus killed Medusa, Theseus killed the Minotaur while Hercules killed pretty much everyone he met, including his wife and child. Bellerophon rode a flying horse, and together they killed the Chimera. The world must have been full of monsters back then.
Every culture has its own version of dragons. Perhaps the most well-known dragons ail from China.
To the Ancient Chinese, the Dragon symbolized power and wisdom. They revered them as a symbol of power, but they needed to placate them. Since they believed dragons could control water, they thought floods occurred when a mortal upset a dragon.
I guess the moral of my story is whatever its species, you need to keep your dragon happy. The same applies to Flynn Hemsworth—hero of my book Dominated By the Dragon. He’s a former super soldier turned mercenary with a dragon demon bonded into his soul.

Title Dominated by the Dragon
Genre Paranormal Romance
Author Kryssie Fortune
A former super soldier turned dragon demon must choose between his soul mate and saving the world from a nuclear winter.
The British army’s nuclear testing bonded a dragon into Flynn Hemsworth’s soul. Military scientists vivisected and tortured him until he escaped two years later. Although he’s never aged, he’s been alone and on the run for almost six decades. When he prevents a naked woman from being the prize lot in a coven’s slave auction, he realizes she has an unexplored submissive streak.
Hope Mathews—a sassy blonde with killer keyboard skills—is a strong independent woman. When Flynn prevents her being sold to a demon, she discovers she enjoys spankings and light bondage.
Together Hope and Flynn must shut down a coven of black magicians, rescue kidnapped demons, and stop a black ops nuclear missile hitting the UK. Even if they manage all that, Hope’s the granddaughter of a billionaire while Flynn’s still on the run from the military who want to dissect him again. Can they find common ground and build a life together?
Reader Advisory: Contains explicit language, a virginal heroine who discovers she enjoys spanking and bondage. Add in some serious dragon demon loving, light the blue touch paper, stand back, and watch the sparks fly..