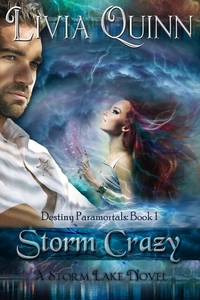 "Love happens, when you least expect it"

Author Bio
Livia Quinn is a DC native who's lived on the bayou in Louisiana for thirty years. After experiencing weather disasters in the South, it was only natural that they would play a part in her Storm Lake world, a place where supernaturals and mere-mortals co-exist (but on different ends of the lake. That's one of the rules. Never let the mortals see you use your magic.)
Storm Crazy
Title Storm Crazy
Genre Urban Fantasy Paranormal Cozy
Author  Livia Quinn
Book heat level (based on movie ratings): PG13
To say I was having a bad day would be like saying Katrina dropped a little rain on the Gulf Coast. I’m Tempest Pomeroy, a mail carrier and a Paramortal like my family. Or I’m supposed to be. If I didn’t have a few little talents, I’d think I was adopted
I’ve denied my heritage for too long. Now, my mother’s out of pocket, my brother’s genie bottle is missing and the sheriff thinks one of us is guilty of murder. I think he’s following me. Is it any wonder I’m calling this the worst MALE day of my life?
Oh, and the sheriff? He thought he’d settled in a normal small town to raise his teenage daughter. Like Mayberry. Not…
Things better settle down soon ‘cause I’m about to go Storm Crazy. 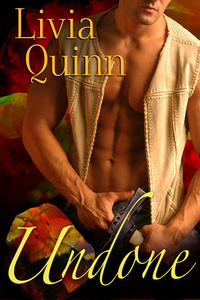 Undone
Title  Undone (A Sexy Romantic Adventure)
Genre Contemporary Romance
Author  Livia Quinn
Book heat level (based on movie ratings): R
When Aussie gem hunter Cass McKay appears unexpectedly on Elektra's design shop doorway, her reasons for sending him away a year ago suddenly seem…complicated, their passion for each other and the secret, intricately entwined.
One year ago on the eve of Carnival, Elektra broke their engagement after the "Blood" opal was stolen. No one steals from Cass, especially not when it cost him the woman he loved.
Elektra's reason for breaking their engagement has now come back to bite her. Cass intends to return to Brazil, putting himself in danger to retrieve her opal, in hopes that Elektra will give their relationship another chance.
Staying out of Cass' bed isn't an option if she's going to keep him safe, but coming clean might make things worse. Elektra is walking a tightrope between desire and deceit, and the truth will endanger not only their love, but their lives.