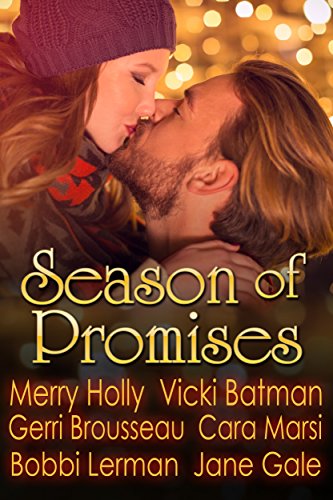 CEO Suzette LeBlec has a problem. Well, two actually. She needs a top-notch temporary replacement for her administrative assistant’s maternity leave, and she needs to find a way to outmaneuver a hostile takeover attempt by Mark Adams. To make things worse, it’s almost Christmas, the time when Suzette most feels alone in the world. Too bad that handsome man at the party got away. But when the same stranger applies for the temp job, his almost-too-good-to- be-true credentials set off Suzette’s alarms. Dirk Harvey worked hard for years to remain anonymous while he built his father’s floundering company back up to its glory days. But when he discovers the stunning woman he’d spotted at a party is hiring, he decides to go undercover as “Dirk Mulligan”, administrative assistant extraordinaire. Besides, he and Suzette have a common problem: takeover King Mark Adams. Maybe they can find a solution together plus a little holiday bonus as well. The Littlest Angel by Vicki Batman Lauren MacDonald has always coveted her mother’s ornament, The Littlest Angel. When her mother gave it to another, Lauren embarks on a lengthy search and finds a replacement only to have it snatched from her hands. Smith Hancock’s grandmother had a little angel which has gone missing. Finding another at a flea market would make her holiday the best ever. Only a feisty girl is claiming it for herself. Can the twosome find common ground and discover the true meaning of Christmas?

The Littlest Angel by Vicki Batman

Lauren MacDonald has always coveted her mother’s ornament, The Littlest Angel. When her mother gave it to another, Lauren embarks on a lengthy search and finds a replacement only to have it snatched from her hands.
Smith Hancock’s grandmother had a little angel which has gone missing. Finding another at a flea market would make her holiday the best ever. Only a feisty girl is claiming it for herself.
Can the twosome find common ground and discover the true meaning of Christmas?

A Promise of Forever by Gerri Brousseau

Her virtue is lost, and her reputation in tatters when a twist of fate sends Lady Roxanne Rothchild from London to the vibrant city of Venice, and into the arms of the handsome and intriguing Danté. But she is not the only one vying for his affection. Anna Maria Delafino de Padova will use everything in her power to drive a wedge between Danté and Roxanne and win his favor, including revealing the truth about Lady Rothchild. Will Roxanne be able to put her blemished past behind her and find love, and will she have the courage to reach for a promise of forever?

Holidays have never brought Las Vegas hotel concierge Laney Sikora anything but bad luck in the romance department. The worst was her fiancé dumping her on Valentine’s Day. Via text. She’s determined to spend New Year's Eve alone with no romantic entanglements. But when her hunky new neighbor locks himself out of his apartment, she can’t leave him standing in the hallway. What's a girl to do?
Las Vegas is just a pit stop for Chicago native and radio personality Chance Carlisle while he waits for his agent to land him something bigger in L.A. But in the meantime, he keeps bumping into—literally—his adorable, but accident-prone, neighbor. Their private New Year’s Eve celebration leads to a plan: they’ll become the Bad Luck Partners, dating only on holidays and special events, avoiding holiday heartbreaks and matchmaking mamas.
But Fate might have something else in mind for the klutzy cutie and the hotshot talk show host. Can their temporary partnership become a forever deal?

Legendary matchmaker, Tillie has one last heart to mend before retiring, but Miriam  and Mike may be her hardest match ever. Can she summon the magic one last time to bring the enchantment of love long given up back to life?

A Christmas Promise by Jane Gale

District Attorney Cherry Stevens is rescued by sexy police officer Drake Boarden during an attempted robbery igniting their passion for not only justice but for each other.
A violent attempted robbery at District Attorney Cherry Stevens’ parents’ convenience store has her setting her sights on the city’s crime boss. Finding herself in the line of fire, Cherry is rescued by the sexiest seasoned police officer on the force. Both work for justice, seeking peace for the city, neither expected to find love in the process.

Marian Lanouette is an Amazon bestselling author. She graduated from Post University with a degree in Accounting, but always dreamed of writing. If I Fail, A Jake Carrington Mystery was her debuted book which hit Amazon’s top two hundred bestselling mysteries along with stellar reviews. She soon followed that up with Burn In Hell, A Jake Carrington Mystery which also resided in the top five hundred on Amazon.
The third book in the Jake Carrington Series, Mated for Life is with the editors as we speak. Look for it in early 2016.
An accomplished author she writes in both the mystery and romance genres. Marian’s Season of Magic (2014) became an Amazon Bestseller and resided on the list for over seventeen weeks. The Season of Anthologies are her brain child and are written under the pseudonym Merry Holly. This May, Marian followed up Season of Magic with Season of Love Box Set. For the 2015 Holiday season the Season of Series will release two books one romance and one mystery titled Season of Surprises and Season of Thrills.
An avid reader, she discovered her love of mysteries by reading the Daily News as a youngster in New York. Intrigued by the real life crimes, and how the police worked and eventually solved cases, ignited her imagination beyond the ordinary.