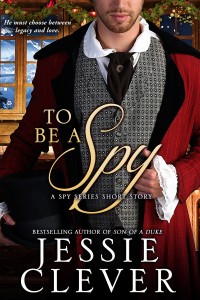 Jessie decided to become a writer because the job of Indiana Jones was already filled.
Taking her history degree dangerously, Jessie tells the stories of courageous heroines, the men who dared to love them, and the world that tried to defeat them.
Jessie makes her home in the great state of New Hampshire where she lives with her husband and two very opinionated Basset Hounds.  For more, visit her website at jessieclever.com.

Why did you write this book?
This story is in response to emails and reviews from readers.  They all wanted to hear more about the Black family, a family of spies during the Napoleonic Wars.  And who was I to say no?  The Black family was happy to oblige with another adventure.
What is your favorite genre to read?
Historical romantic fiction especially when it has an element of mystery or suspense.
Who is your favorite character from fiction (not including your own)?
I’m going to be clichéd and say Atticus Finch from To Kill a Mockingbird.  Ever since he was brought to life by Gregory Peck, I have this weird habit of picturing him as God.  I really do.  There’s just something comforting about that character.
What are you working on at the moment, and will see from you in coming months?
I have just started working on the Shadowing London series, a Regency romantic suspense trilogy that will follow the story line set up in the Spy Series short stories.
Please tell us about your latest book.
Samuel Black must make a decision: to be a spy like his father or follow his heart.
Either is likely to give his mother chest pains.
For Samuel is no longer a lad with the ambitious and noble wish of being a lamplighter to keep the seedy streets of London safe. About to embark on university, his mind stirs with the thoughts of creating a policing force in London to safeguard its citizens. Held back by his family's legacy as spies, Samuel does not make his ideas known.
But when he stops a would-be purse-snatcher, his path unexpectedly veers into that of one Miss Penelope Paiget, and suddenly, Samuel must make a choice.
The short stories in the Spy Series:
1. To Be a Spy
2. To Be a Duke
3. To Be a Lady
4. To Be a Debutante