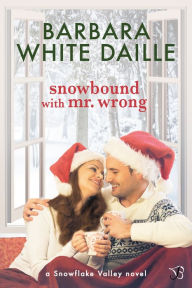 Title  Snowbound with Mr. Wrong
Genre  Contemporary romance
Author  Barbara White Daille
Book heat level (based on movie ratings): G
Worst. Day. Ever. After Lyssa Barnett’s sister tricks her into reprising her role at Snowflake Valley's annual children's party, she doesn’t think anything can be worse than squeezing into her too-small elf costume. Then tall, dark, and way too handsome Nick Tavlock shows up to play Santa…and an unexpected storm leaves them snowbound in the isolated lodge.
The last thing Nick wants is to spend a cozy Christmas Eve with a trio of kids and the woman who dumped him. But as much as Lyssa frustrates him, he can't stop thinking about her. And soon, he's fighting very un-Santa-like thoughts of kissing a certain sexy Miss Elf under the mistletoe. As Nick starts to fall for Lyssa all over again, he knows it will take nothing short of a miracle to have Lyssa in his arms on Christmas Day.

Barbara White Daille lives with her husband in the sunny Southwest. Though they love the warm winters and the lizards in their front yard, they haven’t gotten used to the scorpions in the bathroom. Barbara also loves writing, reading, and chocolate. Come to think of it, she enjoys writing about those subjects, too!
Barbara wrote her first short story at the age of nine, then typed "The End" to her first novel many years later...in the eighth grade. Now she's writing contemporary romance on a daily basis, with a brand-new series from Entangled Bliss (Snowflake Valley), an ongoing series from Harlequin Western Romance (The Hitching Post Hotel), and many more books on the schedule.
She would love to have you stop by her website and blog and to look for her the next time you’re on Facebook and Twitter.