Today's featured book is A Pawn for Malice by Cynthia Roberts 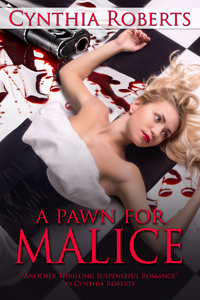 Title: A Pawn for Malice
Genre: Romance Suspense
Author: Cynthia Roberts
Book heat level (based on movie ratings R):
Does an ex-cop ever lose his "nose" for investigating? Freshmen Senator, Bryon Gallagher, certainly hasn't, when the love of his life, Jessica, is kidnapped by a mad man. No stone is left unturned, as he plays the role of senator by day and rogue detective by night, calling in favors and working his past snitches to the bone to find her. The only problem is, who does he focus his efforts on ... her deranged, former father-in-law who lusts after her, a crazed felon hell-bent on revenging the execution of his brother put to death under the Senator's newly passed Death Penalty Bill, or an unknown psycho, looking for his "moment of fame"?
Pawn for Malice is a thrilling and passionate love story that is a blend of crime action, suspense, and self-discovery, or one could even say, a cross between Safe Haven meets Criminal Minds. Order before it launches on Nov. 7th, and receive 60% off.

My love of reading romance fiction goes back to those early years when I was raising a young family. It wasn't until much later in life I actually took up the pen to write my first historical romance, Wind Warrior. I really don't fit into one specific niche. Once a story starts to flow, it's only then I know what genre/sub-genre it will fit under.
I have only one regret, and that is not getting to this point in my career much sooner, rather than later. Life has a way of setting up road blocks, which for me, was supposed to work out that way. Because of those detours, I have become a more passionate and expressive writer, allowing me to create the kind of raw human emotion I want my readership to feel.
It is my hope you walk away with not just an entertaining read, but the importance in knowing, "Without imagination & dreams, we lose the excitement of wonderful possibilities.