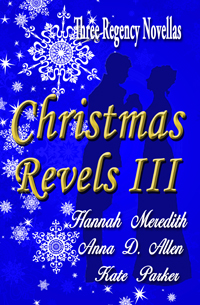 Title Christmas Revels III: Three Regency Novellas
Genre Historical Romance
Author Hannah Meredith, Anna D. Allen, and Kate Parker
Book heat level PG13
When days turn dark, Christmas brightens the way... Come Revel with us again!
Magdalena's Christmas Rake – Thomas Eddington comes home for a family Christmas to discover his mother in a matchmaking mood. Worse, she has invited his childhood nemesis, "Mad Maddie" Winslow, to act as chaperone to the eligible debutantes. For her part, Magdalena Winslow hopes to go unnoticed. She certainly wants nothing to do with a London rake, and she's not afraid to let him know it.
Christmas Promise - When skaters at a Christmas house party find a dead man beneath the ice, the squeamish local magistrate relies on Eve Franklin to help with the investigation. Complications arrive with Lord Adam Downing, who is searching for the dead man - and stolen jewels - on orders from the Prince of Wales. Eve must now convince the aristocrat to view her as an equal—but he sees her as so much more.
The Christmas Rose - Lord and Lady Trenton have an exemplary society marriage—an amicable partnership. Simon dedicates himself to his Parliamentary responsibilities and estate concerns. Emma devotes herself to their children and her charitable endeavors. But when the stress of the coming Christmas season fractures their facade of marital harmony, they discover what they both really need and want. Each other.

Hannah Meredith, Anna D. Allen, and Kate Parker are three "mature" women whose imaginations are happiest in the past. Kate writes historical mysteries and currently has three series available. Hannah and Anna write primarily historical romance, although both of them have been known to wander into other genres. This is the third Christmas anthology in which all three have participated. Hannah lives in a small town with a big library in the Coastal Plains of NC. Anna resides in the deep woods of Michigan where she loves to cook and collect old cookware. Kate lives in a historic town in Eastern NC and studies poisons, much to the discomfort of her husband. All have individually won various awards, although since none of them was a Nobel Prize for Literature, they're not mentioning them.

Author Social Media for each author