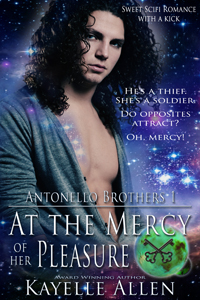 Today's featured book is At the Mercy of Her Pleasure by Kayelle Allen.

About At the Mercy of Her Pleasure

Book 1 of the Antonello Brothers series is Scifi Romance
Genre science fiction romance, scifi romance, space opera, military science fiction
Book heat level (based on movie ratings): PG13
Hired to steal back a prototype taken by the imperial armada, Senth Antonello retrieves it, but his brother is kidnapped to force Senth to surrender the device.
Now he has to rescue his brother, outsmart the armada, and keep the item out of imperial hands. All doable, except for one small problem. He must do it in the company of NarrAy Jorlan, a genetically altered woman whose pheromones could enhance the mission or crumble it into dust with a single siren kiss.
He's a thief. She's a soldier. Do opposites attract? Oh, mercy!

Buy At the Mercy of Her Pleasure

Publisher Romance Lives Forever Books
This book is free on Kindle Unlimited
Amazon http://amzn.to/1f7FQ2h
Amazon print http://amzn.to/2e4hpbX
CreateSpace (Print) http://bit.ly/bro-mercy-csp
The sequel for this book is For Women Only.

Kayelle is a best-selling American author. Her unstoppable heroes and heroines include contemporary every day folk, role-playing immortal gamers, futuristic covert agents, and warriors who purr.