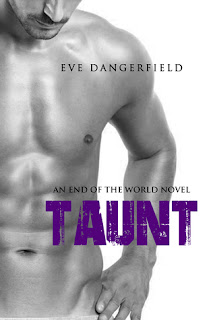 Eve has loved romance novels since she first started swiping her grandmother's paperbacks at the age of fourteen. Now she writes her own unapologetically sexy tales about complex women and gorgeous-but-slightly-tortured men. Eve currently lives in Melbourne with her lovely sister and a rabbit named Billy.

Genre Contemporary Romance, Erotic, Thriller
Book heat level (based on movie ratings): R
Daniel Schwartz never meant to uncover the apocalypse, unfortunately for the Kiwi hacktivist, that's exactly what happened. Yet while it's clear to her what she should do; cover it back up and get completely smashed, the rest of the world doesn't agree. A shady corporation places her in a beachside prison where they promise to hold her until she agrees to talk. Dani would be pretty annoyed if she weren't:
a) Biologically incapable of being annoyed
b) Very intrigued by the men hired to guard her
c) Extremely hungover
John, Colt, and Seb have poured a lot of time and money into their private security business the last thing they need is to waste six weeks babysitting a hyperactive hippie. Sadly they've signed a shady but watertight contract. Each of the three men finds himself drawn to the weird, pop-obsessed Daniel and she to them. As they become entangled in each other's lives Daniel is forced to answer some big questions such as; how can you escape when there's nowhere safe to go? How can a commitmentphobe fall for not one, but three different men? And, most importantly, should New Zealanders kick people who call them Hobbits? (Yes.)
Taunt is a heart-stopping erotic thriller; chock full of science, nail-biting suspense, period jokes and good old fashioned lust.

The Heroine's Relaxed Side

This heroine is at a party. Considering her story, describe the party.
The party would be an outdoors event hosted by Daniel's eco-terrorist organization Grassroots. It's a chance to connect and unwind with other members and there would be live music, plenty of food and drink and a casual dress code.
How does the heroine feel about being this particular party, and what body language is she displaying that gives it away?
Daniel would be thrilled to attend, bouncing around trying to talk with as many people as possible while trying to peer-pressure others into getting loose and making mistakes. She never stops smiling or talking, unless she's kissing that is.
Is she more likely to mingle or remain aloof?
Mingle. Daniel loves being around others and more often than not, the center of attention.
If she drinks, what is her drink of choice at this party?
Daniel doesn't drink as her biochemistry doesn't allow for it. She is however, very partial to substances of dubious legality. Also weed.
How much drink is her usual?
Weed. Or fruit juice in glasses that make it look like alcohol.
The heroine figures out where the hiding places are and then goes there. Is it to hide, to avoid someone, or to go drag a friend back to the party?
It would completely be to drag a shy friend, perhaps a scientist or socially awkward programmer back into the fray. Once they'd been brought back to the party she'd make it her personal mission to get them drunk and laid.
Is she likely to latch onto a friend and stay with him/her and ignore others, or is she the friend that others latch onto?
She is the friend that others latch onto; the bigger problem can be maintaining her attention once you have it. Daniel is very distractible.
If someone picked a fight at this party, how is the heroine going to handle it?
Daniel is, by her own admission, a lover not a fighter. As Grassroots is a pacifist organization it would be kind of weird for a fight to get out of hand at one of their parties, but if it did Daniel would probably dump punch/cake on the offender's heads and tell them to stop or she'd leak their information to the Feds.
Is the heroine the one most likely to get tossed out of the party, or the one who does the tossing?
Tossed out. For sure. No questions asked.
Will she know when to leave, or stay late and make a nuisance of herself?
She will stay late as she possibly can (unless she picks up). Being a nuisance is kind of Daniel's wheelhouse.

The Heroine's Stressed Out Side

How does the heroine handle it if the cops or some other authority figure pulls her aside when she was blameless in a situation?
Lies her ass off, says whatever she thinks they want to hear then escapes at the earliest possible opportunity.
How does the heroine react to hearing a scream?
Runs towards the sound without thinking.
If she sees someone being assaulted, what is the FIRST thing that crosses her mind?
What the actual fuck? Stop it you butthole!
If she sees someone being assaulted, what is the FIRST thing she does?
Runs towards them and tries to break them apart, unless she knows she'll likely be hurt and overpowered in which case she would call the cops/throw something/ find an alternative plan of action.
This heroine attempts to rescue someone and realizes that she is in over her head. The odds are against her and there is no way out. She is going to get her butt handed to her. What does she do?
Fights as hard as she can for as long as she can, giving everything she has.
The heroine runs into the one person from her past she wanted to avoid. She can't get out of the situation and must interact with him/her in some way. What does she do?
Barrels into the awkwardness and tries to overwhelm the person with the sheer force of her personality.
Someone younger than the heroine is in charge of the situation, and they are handling it badly, perhaps bungling things. How does the heroine deal with it?
Tact isn't Daniel's strong point. She would tell the person straight up that they're screwing the pooch and either suggest improvements or conduct a mutiny to get the situation resolved another way.
The heroine is in physical pain but must bear up under it and keep going. What does she tell herself in order to get through the situation?
Daniel has a rare chemical disorder that affects her ability to feel physical pain, however she is capable of feeling distressed. In those moments she closes her eyes and tries to focus on happy memories from the past.
What mentor's words come to mind in a bad situation?
She recalls John Blackwood, her lover, telling her to relax and count her breaths, then she does it.


Goodreads https://www.goodreads.com/author/show/14427168.Eve_Dangerfield
Posted by Kayelle Allen at 7:05 AM