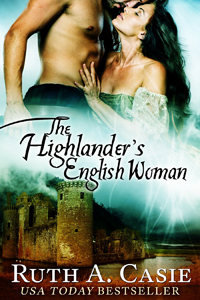 "It pulls at my heart with its beauty and purpose. It represents all I hold dear in a person, if that's possible, heart, soul and strength."  Laura Reynolds, The Highlander's English Woman
I knew I found the right setting for my medieval ghost story when I saw a picture of Caerlaverock Castle.
Reading Caerlaverock's history I understood why the Maxwell family fought to hold it and why their enemies had to destroy it.
Caerlaverock Castle is a moated castle on the southern coast of Scotland in the Dumfries. The unique equilateral triangular design and beauty of the castle, from the way it's sited to its rich history, made Caerlaverock the perfect setting for my stories, The Maxwell Ghost and The Highlander's English Woman.
There were several original fortifications that preceded the current castle, a Roman fort on Ward Law Hill and a British hill fort that was used until 950.
The earliest mention of Caerlaverock is the 1160s, when the lands were granted to the monks of Holm Cultram Abbey. Sixty years later, in 1220 the lands were granted to Sir John Maxwell by Alexander II of Scotland.
The Maxwell family has owned the Caerlaverock Castle ever since, but not without some intrigue and adventure. The clan leader changed allegiances from Scotland to England several times which resulted in sieges, destruction and rebuilding.
John Maxwell began construction of the first castle at Caerlaverock. A traditional square design with a moat and a north facing bridge, the building was one of the earliest stone castles built in Scotland. Archeologists believe that this castle was never completed when it was abandoned. This castle was built close to the Solway Firth. Built on clay the wood pilings were not able to bear the weight of the structure. In addition, the structure couldn't be kept dry or comfortable. Today, the foundations and part of a wooden enclosure around it is all that remains.
Work began on the new castle, six hundred feet south of the abandoned structure in 1260.
Construction on the new (present) castle, on a solid rock outcropping and was completed in the 1270s. The castle's first occupant was Herbert Maxwell, nephew of Sir John Maxwell.
Caerlaverock was the Maxwell family's stronghold from the 13th to the 17th centuries. It underwent several sieges over the centuries and was finally abandoned in 1640. The castle has been destroyed and rebuilt several times, but retained its triangular plan.
In 1299, Maxwell forces from Caerlaverock Castle attached the English-held Lochmaben Castle. Edward I retaliated in July 1300 and attacked Caerlaverock with 87 knights and 3,000 men. Eustace Maxwell, the clan chief repelled the English several times. In the end, the garrison surrendered. King Edward was astounded that only sixty men held his army off.
Caerlaverock Castle remained in English hands until 1312 when the castle was returned to Sir Eustace Maxwell who pledged allegiance to the English king, Edward II. Later, Eustace switched his support to Robert the Bruce and the castle was unsuccessfully attacked by the English.
Because of Caerlaverock's prime position on the England-Scottish border and the fear it could fall into the hands of the English who would have a strong command of the district, Sir Eustace dismantled the fortress, a sacrifice rewarded by Robert the Bruce.
In 1337 the castle was once again inhabited and once again the Eustace changed sides. About 1355 the castle was captured by the Scots.
The Maxwells regained Caerlaverock after the Wars of Independence in the mid-14th century. Between 1373 and 1410, Robert Maxwell rebuilt much of the castle. His efforts were continued by Robert II in the mid-15th century.
In 1567, the Maxwells supported Mary, Queen of Scots and Caerlaverock was once again under siege by the English in 1570. The Earl of Sussex led the English forces and demolished part of the castle.
In 1593, Lord John Maxwell repaired the castle for defense against the Johnstones of Annandale with whom he was feuding.
The Wars for Independence were replaced by wars of religion. In 1634, religious turmoil turned against the Catholic Maxwells. In 1640 the Protestant Covenanter army attacked Caerlaverock for thirteen weeks forcing the castle to surrender. The south wall and tower were demolished and the castle was never repaired or reoccupied.
The castle passed by inheritance to the Herries family and to the Duke of Norforlk. While currently owned by Lady Mary Mumford's sister Baroness Herries, since 1946 the castle has been operated and managed by Historic Scotland. The castle remains the ancestral home of the Maxwell family.

About Ruth A. Casie

Ruth has always had stories in her head.  Encouraged by family and friends this ballroom dancing, Sudoku playing, aspiring gourmet has given way to her inner muse. Now, rather than write marketing and communications for corporate America, she writes historical fantasies about strong men and empowered women and how they cope with unexpected challenges. She hopes her stories become your favorite adventures.