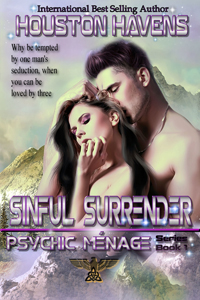 Top psychic spy Fay Avalon saw too much on her latest mind traveling mission and is now on the run from her post-catastrophic dystopian government, searching for the truth and proof. She escapes but is shot down, landing in the arms of the enemy.
In Drakker and Arlo's world, women are so rare the men have accepted a polyandrous lifestyle. When the brothers stumble upon Fay unconscious in the wreckage of an aircraft, they are immediately attracted to her. Arlo wants to keep her, but Drakker knows they can't. They must take her to their brother Logan Abán, leader of their people.
Logan struggles with trusting anyone, even himself. When a beautiful, intelligent, and intriguing woman falls into their laps, his denied desires for intimacy challenge his need to trust the spy. He's frustrated by romantic Arlo's claims of her innocence. Even when pragmatic and dominating Drakker defends her as well, Logan refuses to trust his gut.
Can one woman satisfy the diverse desires of three men? Will Logan's fears be realized by betrayal? Is Fay to be sentenced to death as a spy, suffer a fate worse than death by being returned to her government as a traitor, or will she find a new life and love as the wife of three sexy brothers?
Genre Erotic Romance, SciFi, Menage, PNR, Fantasy, Futuristic, Suspense, Dystopian, Post-Apocalyptic, Mystery
Book heat level (based on movie ratings): R