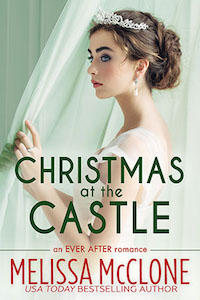 Today's featured book is Christmas at the Castle by USA Today bestselling author, Melissa McClone. Melissa has published over thirty-five novels with Harlequin and Tule Publishing Group and been nominated for Romance Writers of America's RITA® award. When she isn't writing, you can usually find her driving her minivan to/from her children's swim practices and other activities. She lives in the Pacific Northwest with her husband, three children, two spoiled Norwegian Elkhounds and cats who think they rule the house. They do!

About Christmas at the Castle

Genre: Sweet Romance
Author: Melissa McClone
Book heat level (based on movie ratings): G
A royal wedding. A meddlesome mother. An unexpected union.
A European getaway during the Christmas holiday is exactly what veterinarian Katrina "Kat" Parsons needs. She can't wait to be a bridesmaid in her childhood friend's royal wedding, but she hopes to steer clear of the bride's arrogant older brother.
Crown Prince Guillaume wants his younger sister's wedding day to be perfect, but he's suspicious of Kat. He and his mother on are on high alert, afraid Kat is not just there for the wedding, but also to find a prince of her own.
But when Kat's kindness and generosity prove them wrong, the prince realizes there's more to her than he ever imagined. Can he trust his heart or will he lose the one woman he can't live without?

Buy Christmas at the Castle