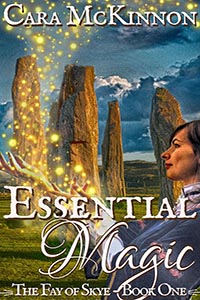 Genre Fantasy Romance
Book heat level (based on movie ratings): R
A woman driven to excel. A man ashamed of his past. A desire that could lead them to bliss...or peril.
Etta Mae Cook, a mountain witch from Appalachia, arrives in London in 1895. Her goal: to study magic. But she steps off the train and into a dangerous world of politics, decadence, and power. Queen Victoria, the Prince of Wales, and the Fay Clan are waging a silent war. In the balance: the future of spellcraft in the kingdom. Etta's lineage and magical power make her an asset – or a threat – to all three formidable forces.
Her choices skew when she meets Malcolm Seward, a mage of the Fay Clan. He once held a prominent role in society, but a tragic mistake forced him to flee into obscurity. His attraction to Etta draws him back into the fray, but though she's drawn to him in return, she didn't come to England for desire.
Despite her intentions, their passion flares, and Malcolm falls for her. Now, Etta must choose: love, or ambition? Either path could mean the renewal -- or the destruction -- of British sorcery. If she follows her heart, will she doom their magic?

Cara wrote her first fantasy romance at the age of six, about a unicorn couple that falls in love and has adventures (there is also pie). Now she writes about humans falling in love and having adventures, but she can't quite stop including magic. She loves history and historical romance, so she decided to set her books in an alternate Victorian era where magic is not only real, but a part of everyday life. Cara attended the best genre writing school in the world, Seton Hill University, where she received an MFA in Writing Popular Fiction and found her writing tribe. She lives on the East Coast of the US with her husband, two kids, and an oversized lapdog named Jake.