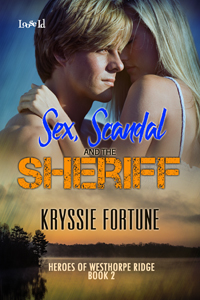 About Sex, Scandal, and the Sheriff

Title Sex, Scandal, and the Sheriff
Genre Contemporary, erotic, suspense.
Book heat level (based on movie ratings): R
Jasmine Stewart (Jazz to her friends) falls for the blond stranger when he spanks and seduces her at a Washington soiree. Later, when she discovers her flatmate is trying to draw her into a spy ring, she goes to the authorities. The ensuing publicity costs her her job, her security, and her future. Starting over in Westhorpe Ridge is her only option.
Sean Mathews, former SEAL and Westhorpe Ridge's sheriff, can't forget the woman he spanked when he visited Washington, but he thinks she's a spy. When she turns up in Westhorpe Ridge, he tries everything to make her leave town. Despite their misunderstandings, though, they can't keep their hands off each other.
As Year's Eve looms, the spy ring resurfaces. Jazz will need all of Sean's SEAL prowess to survive. But because his wounded leg cost him his speed in the water, will it be enough?

Age: 23
Gender: Female
Birthplace: Washington DC
Profession: Teacher turned baker
Ethnicity: Caucasian
Please provide a physical description of yourself.
I'm five feet six, but I'm a bit on the skinny side, mostly because I get wrapped up in things and forget to eat. I wear my hair long. It's more dark honey than flaxen, but I'm blonde. My eyes? I don't know. Pale blue, I suppose.
Please tell us a little about yourself.
I grew up in more foster homes than I have fingers. A couple were good, some were okay, but most weren't good places for me. I learned early on how to push people away. I have a bit of temper too, but it's more under control now than when I was a kid. I always hoped someone would see though my tough front and love me. Not that my foster families ever did.
I trained as a teacher, but the school principle freaked when my flatmate tried to involve me in a spy ring. As if I'd ever betray my country. Then Mandy Devlin offered me a chance to open a bakery in her hotel. I jumped at the chance
Who is the significant other in your life?
Sean Mathews. That's Sheriff Mathews of Westhorpe Ridge. He trained as Seal, but when a bullet cost him his speed in the water he came home and took over the role of sheriff in his home town. Of course, since he thought I was a spy, he didn't like me much at first.
How do you dress?
Jeans and T-shirt for every day. For evenings, I have this one red dress. I was wearing it in Washington, at the spy soiree thingy and Sean loved it. Of course, like me, he was there under false pretenses.
Are you book-smart, self-taught, widely-experienced?
My education was as patchy as my home life. Changing schools a bazillion times made things hard. There was this one teacher, when I was about thirteen, who cared more about her pupils than I'd expected. She got through to me and taught me the value of education. I buckled down and made myself learn. I guess she'd the reason I trained as a teacher.
Do you get by, live comfortably, live extravagantly?
I always lived hand to mouth, but then it turns out I had this multi-millionaire great grandmother, but she was an evil old witch. She knew I existed and left me in the foster system. What sort of woman does that to her family? Anyway, I guess her conscience kicked in eventually. She left me three-quarters of million dollars. Me? With more money than I can imagine. That's not all though. If me and my newfound second cousins marry within a year of her death, me and Abigail, get another four get four million dollars.
Abigail's married to a former Marine now, but he's a bit scary sometimes. That said, he loves her to pieces. He and my Sean rescued her when mobsters kidnapped her, but that's another story.
I haven't met my other second cousin yet Adam yet, but he's a doctor in the Army. He's due home at Easter. He gets the bulk of my great grandmother's estate – that's about fifteen million dollars—along with Montgomery Hall. Honestly, that's too much money for me to imagine.
Are any of your skills a source of pride or embarrassment, and if so, which ones and why?
I'm a great baker. One of my best foster mums taught me, but then she got ill and social services moved me. Don't tell Sean, but thanks to my upbringing, I can throw a mean punch. Of course, as wife of the local sheriff, I never would.
What is your family like?
I already said my great grandmother was witch. Abigail's got the kindest heart but she puts herself down too much. Mandy Devlin, the woman who gave me a chance to start over in the bakery helped with a sort of mini makeover. Mandy's and her son, Ben feel like family too. I still don't know what I'll make of Adam. He's Sean's best friend, but to me, he should have been there for Abigail more when her great grandmother and her mother started to gang up on. Considering the way her family treated her, I don't how Abigail ever found the courage to advertise for husband.
How well do you know your neighbors?
Westhorpe Ridge is a small town with a big heart. Everybody is welcoming and warm, Kevin Jones excepted of course. He tried to make trouble between Sean and me but things worked out all right in the end.

Buy Sex, Scandal, and the Sheriff