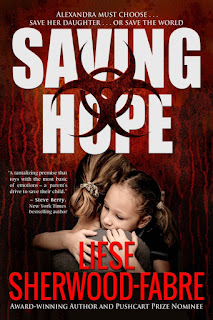 Welcome Liese Sherwood-Fabre, author of Saving Hope, a thriller with romantic elements re-release.
Why did you write this book?
This story's inception involved two elements: a copy of Richard Preston's March 9, 1998 New Yorker article "Annals of Warfare: TheBioweaponeers," and my work in Russia. Preston's article was about the country of Iran hiring unemployed scientists from the Soviet Union's bioweapons program. It made me speculate on why someone would go to work for another country in this field. I came up with an unemployed scientist with a very sick daughter who saw this job as the only way to get the care the daughter needed. I didn't work in the area of bioweapons or even with the military, but I did work in the field of healthcare and was familiar with the state of the Russian medical field following the fall of the Soviet Union.
What is your favorite genre to read?
Mystery/thriller—by far.
Who is your favorite character from fiction (not including your own)?
Oh, so many. Maybe Scarlet O'Hara because of her strong character. No one was going to stop her from getting her way—not the Yankees, the carpet-baggers, or even the war.
What are you working on at the moment?
I just completed a sequel to a book I wrote on Sherlock Holmes at 13 (he turns 14 at the end of the sequel). The first is with my agent. I'm now considering my next project.
What books will we see from you in coming months?
In addition to this re-release (the original publisher, Musa Publishing, folded and so I'm bringing it out myself), I have a book of essays on The Life and Times of Sherlock Holmes. It describes aspects of Victorian England presented in the Sherlock Holmes stories.
I also have a short story in an anthology, Curious Incidents: More Improbable Adventures. The collection shares stories of Sherlock Holmes in alternate universes. In mine, the world is inhabited by vampyres, and Holmes is called in to solve a very gruesome murder of one.
Please tell us about your latest book.

Genre Thriller with romantic elements
Book heat level (based on movie ratings): PG-13
NYT Bestseller Steve Berry described Saving Hope as "a tantalizing premise that toys with the most basic of emotions—a parent's drive to save their child." And Chanticleer Reviews gave it four stars. "This reviewer's heart was pounding as the final pages of this book flew under her fingers at 2:30 in the morning."
In one of Siberia's formerly closed cities, Alexandra Pavlova, an unemployed microbiologist, struggles to save her daughter's life. When she turns to Vladimir, her oldest friend, for help, she's drawn into Russia's underworld. His business dealings with the Iranians come to the attention of Sergei Borisov, an FSB (formerly the KGB) agent. Alexandra finds herself joining forces with Sergei to stop the export of a deadly virus in a race to save both her daughter and the world.
Buy Saving Hope
This book is coming soon. Please visit the author's website:
http://liesesherwoodfabre.com