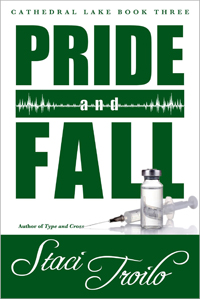 This quick interview with Staci Troilo includes info about the author, and introduces the story, Pride and Fall.

Staci has always loved fiction, ever since her parents read her fairy tales when she was a young girl. Today, her interests are much more eclectic. She loves getting lost in sci-fi battles, fantasy realms, horror worlds, suspenseful intrigues, and romantic entanglements.
As goes her reading, so goes her writing. She can't pick a single genre to focus on, so she doesn't even try. She's proud to say she's a multi-genre author.
When she's not reading or writing, she's spending time with family and friends, possibly cooking for them, or maybe enjoying an afternoon in the pool. To learn more about her, visit http://stacitroilo.com.

Why did you write this book?
Pride and Fall is the culmination of a trilogy in the Cathedral Lake series. I began the series because I found interesting medical traits when doing some research online, and I had to turn those facts into a story. I wrote Pride and Fall to bring the trilogy to a close. But because this series has become a fan-favorite, I have several spinoffs planned.
What is your favorite genre to read?
As my bio states, I'm a fan of several genres. But my absolute favorite is probably romantic suspense, because it combines love stories (which I'm a sucker for) with tension-infused situations (I love pulse-pounding, anticipatory storylines).
Who is your favorite character from fiction (not including your own)?
Rhett Butler. I have a weakness for tall, dark, and handsome bad boys. I also like that he didn't see the heroine as perfect and ultimately left her in the end when he tired of her games. Too many heroes put the heroines on undeserving pedestals; Rhett isn't one of them.
What are you working on at the moment, and will see from you in coming months?
I'm currently working on book three of my paranormal romance saga, the Medici Protectorate series. This novel, Body Armor, is scheduled for release in June 2017, and its follow-up, Tortured Soul, will come out at the end of the year, ending the series.
Please tell us about your latest book.
Fear unchecked cripples. Fear conquered liberates.
Faith Keller has suffered much in her life—the murder of her sister, the near-destruction and almost-ruin of her family, and a traumatic abduction. It's no wonder she battles the effects of PTSD on a daily basis. The last thing she needs is to be the subject of an intense police investigation for the very crime her father was blamed for years earlier. Yet, despite her family's staunchest efforts, she finds herself on the hot seat with a tenacious officer—one whose attention she actually relishes.
Carter Emerson takes his job seriously. It's the only tribute he can make to honor his fallen brother, and he's determined to do the title "police officer" justice. When he sets his sights on Faith Keller, he's torn. His mentor tells him he's got it all wrong, but the evidence doesn't lie. The worst part? He doesn't want her to be guilty. He just wants her.
A story of healing and personal growth, Pride and Fall ends the Keller Family trilogy with action, deception, and a revelation readers won't see coming.

About Pride and Fall