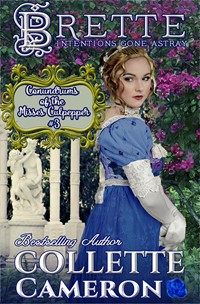 Welcome Collette Cameron author of Brette: Intentions Gone Astray, a new Regency Romance.
Why did you write this book?
Brette: Intentions Gone Astray is the third book in my Conundrums of the Misses Culpepper series.
I knew Brette, and her hero, Alexander Hawksworth had to have their own happily-ever-after since the first moment they met, and she thought he was a valet.
What is your favorite genre to read?
Historical romance and just about every subgenre.
I like the little historical tidbits I learn while I'm indulging in a romantic read.
It's sort of like hiding veggies in macaroni and cheese so my kiddos didn't realize they were getting healthy food with one of their favorite meals.
Who is your favorite character from fiction (not including your own)?
I usually say the Count of Monte Cristo, and he's still my standby hero, but I was just thinking about The Three Musketeers the other day. I've always been a fan of D'Artagnan.
What are you working on at the moment?
I just finished up a novella for a boxed set releasing in March, Regency Ever Afters, and I'm closing in on the last chapter of another novella for—you guessed it—another set, The Forbidden Highlands.
As soon as that's finished, I'll jump right into the 6th and final book in my Highland Heather Romancing a Scot series.
What books will we see from you in coming months?
Well, I already mentioned two of the sets I'm involved with, but there are two more as well: Her Perfect Gentleman and A Lady for Every Lord. You'll also see Passion and Plunder, the 5th book in my Highland Heather Romancing a Scot series.
Please tell us about your latest book.
He thought his adventures were over...
A rogue reluctantly turned rector, Alexander Hawksworth, prefers soirées to sermons and parties to prayers. Though impoverished, he seizes every opportunity to escape parish duties, preferring to hob nob with London's finest–especially after the precocious and petite Brette Culpepper arrives in Town. Alex secretly fantasizing about claiming the breathtaking beauty as his very own, and when he unexpectedly inherits an earldom, he's determined to make her his countess... Until he's accused of murdering the previous earl.
Then she burst headlong into his life...
New to Society, Brette adores the whirlwind social scene, the stream of invitations... the slightly-sensual verbal sparring with the devilishly attractive, much too witty, and oh so unsuitable Mr. Hawksworth. But her fairy tale existence crashes to a halt when rumors circulate she's a peer's illegitimate granddaughter. Even though he's left her a tidy inheritance, formerly hospitable doors slam in her face as a newly appointed guardian emerges, intent on stealing her wealth and forcing her to wed an elderly despot.
Time is against them as Alex struggles to clear his name and deliver the woman he loves from an unthinkable fate
Genre Regency Romance
Book heat level (based on movie ratings): PG

A bestselling, award-winning author, Collette Cameron pens Scottish and Regency historicals featuring rogues, rapscallions, rakes, and the intelligent, intrepid damsels who reform them.
Blessed with three spectacular children, fantastic fans, and a compulsive, over-active, and witty Muse who won't stop whispering new romantic romps in her ear, she still lives in Oregon with dachshunds, though she dreams of living in Scotland part-time.
Admitting to a quirky sense of humor, Collette enjoys inspiring quotes, adores castles and anything cobalt blue, and is a self-confessed Cadbury chocoholic. You'll always find dogs, birds, occasionally naughty humor, and a dash of inspiration in her sweet-to-spicy timeless romances.